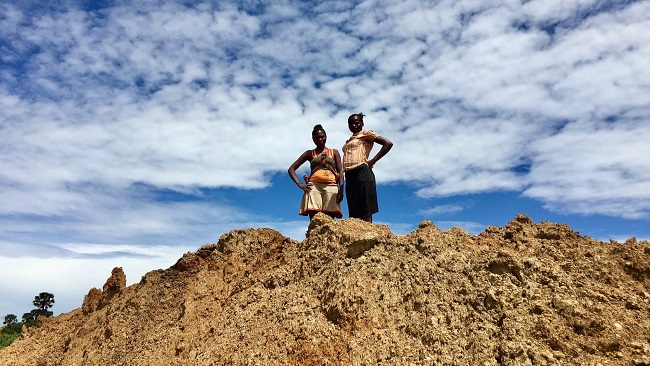 It was the last day of the summer holidays when, on his way to meet friends in his hometown of Batouri, eastern Cameroon, 12-year-old Saustem Brandon Samba slipped on reddish mud and fell into what at first looked like a large puddle.

The puddle turned out to be an abandoned gold mine, with a steep drop, 18 metres deep. Samba tried to get out, his arms and legs scrambling frantically in search of something to grip on to as muddy water choked him.

His father, Sah, still carries a photo of his son’s lifeless body after it was recovered from the mining pit in September 2017.

Between 2017 and 2019, at least 115 children and adults drowned or were buried alive by landfalls in the mostly abandoned pits in the East and Adamawa regions of Cameroon,according to Forests and Rural Development (Foder), a local watchdog that is alone in tracking the accidents and deaths.

“The whole area was not at all secure,” says Sah, whose fury is clear as he describes how gold mining pits in the region – which locals call “tombs” – have been left open and abandoned by Chinese companies, among others.

Samba’s tragic death was not exceptional. The recorded body count, say campaigners, is only the tip of the iceberg in terms of forgotten victims of the ruthless modern-day hunt for one of the world’s most sought-after metals – gold.

Cameroon has one of the richest subsoils in Africa.

Since 2008, gold prices have risen and informal mining has spread widely across the continent. In recent years, more than 400 mining sites have been dug open by dozens of mining companies in Cameroon, predominantly from China, but also from South Korea, Greece, South Africa and elsewhere, according to Foder. Some British companies advertise online that they conduct gold exploration programmes in the country.

Cameroonian law obliges anyone exploiting a mining site to close and restore it before departing. In practice, however, once miners finish digging up gold from pits of up to 100 metres deep, they simply move on to the next project. Few – if any – mining holes are properly restored.

The scale of this is vast, says Eric Etoga, a Cameroonian activist who has been researching the extractive industries for years for Global Youth Dynamic, a local NGO. According to a study he produced in June 2019 for the Publish What You Pay campaign group, mining companies had left 248 open mining holes in in one area of east Cameroon alone. “We need sanctions – without them, people continue to do whatever they want,” said Etoga.

Cameroon’s ministry of mines did not reply to repeated requests for comment.

The Cameroonian branch of the Extractive Industries Transparency Initiative (EITI), a global body that promotes itself as setting the “global standard to promote the open and accountable management of oil, gas and mineral resources”, also failed to address the deaths in the mines, simply forwarding government reassurances that the numbers of mortalities in abandoned pits have significantly decreased over the past two years.

The ministry of mines added that there are fewer deaths following its implementation of information campaigns. “The risky zones have been marked and picture-diagrams have been erected to inform locals of the dangers,” wrote Aristide Mimbang of Cameroon’s mining ministry, in an email forwarded by EITI Cameroon.

Walking among abandoned mining holes in parts of eastern Cameroon, nothing appears further from the truth. Not a single signpost or diagram was seen in the seven sites visited by the Guardian, as unaccompanied young children walked barefoot or wearing flip-flops in the dangerous areas. Women with babies tied on their backs were seen descending into the mines with no protection or safety precautions.

On paper, some British companies extracting gold in Cameroon praise the benefits of the business for local populations, claiming that it helps villagers to survive financially. On the ground, some of the youths working in gold mines confirm that the industry enables them to earn money, which they would otherwise have been unable to do in an underdeveloped region that lacks basic services, including a steady electricity supply.

Yet, when it comes to the open mining pits, corporate reassurances that the holes will be filled up and restored ring hollow. The landscape of eastern Cameroon, which in the past used to provide fertile farming ground for the local population, nowadays resembles the surface of the moon, with giant holes puncturing the once green landscape. As the midday sun heated the pits, the brown, polluted waters inside reek of chemical waste, attracting clouds of buzzing mosquitoes that spread malaria, dengue fever and other killer diseases.

Yet, in eastern Cameroon, the visit prompted protests, as miners picketed outside a Chinese-run gold mining project in the village of Ngoura, blocking access.
In December 2017, in the nearby village of Ngoe Ngoe, nine people were killed during a land fall in a deep mine left open by the Chinese company Lu and Lang. The pit had been abandoned by workers less than a month earlier.
Chinese and other foreign companies are not the only ones responsible. In 2017, Narma Ndoyama, a farmer, lost his 28-year-old son after he was buried alive in a mine landslide in the Longa Mali village, eastern Cameroon.

“Now his wife is alone trying to provide for five children,” says Ndoyama, adding that the average of 1,500 west African CFA francs (£1.91) he makes each day from farming leaves him unable to help much.

Ndoyama alleges that the mine in which his son died belonged to Société Camerounaise d’Exploitation Minière (SCEM), a company owned by Ali Bachir, a prominent member of Cameroon’s national assembly from the ruling party, the Cameroon People’s Democratic Movement.

Ndoyama said that he had tried to press SCEM officials to launch an inquiry into his son’s death in the hope of getting some desperately needed compensation for the family, but received no response. “The gendarmerie came to do an investigation, but there was no follow up,” he says. “The state lets people just die in the holes.”

In a telephone interview, Ali Bachir confirmed that he owns SCEM and that the company is still operating, but denied that his company is involved in digging mining pits.

“There’s not even a single hole that we’ve left open,” he said.

“We do research,” he added. “It’s the Chinese who left the holes open … It’s they who are exploiting gold in Betare Oya.”

Yet official ministry of mines documents obtained by the Guardian show that SCEM has conducted gold exploitation in several sites in eastern Cameroon – all without proper authorisation. According to the documents, two branches of SCEM were operating in the Betare Oya region in 2016, using five excavators, and declaring a total of 230 grams of gold a month.

In April 2018, Cameroon’s ministry of mines issued a notice to force companies including SCEM and Lu and Lang to shut down their operations, in some cases because of the safety hazards posed by deserted open holes. SCEM was found to have been operating without any formal authorisation or licensing, the mining minister said at the time.

A total of 1,776 Cameroonians signed a petition, initiated by Foder, that called on the government to force mining companies to abide by the law and close the open pits.

“Honourable ministers, how many more deaths do you want in order to put an end to this?,” the petitioners asked. “These irresponsible mining companies… are pillaging us and they are killing us.

“These poisonous lakes, these gold pits have become tombs.”

As the presence of mining companies destroys farm land, pollutes water sources and poisons the local fish, instead of digging the ground for crops the locals are now digging for gold in order to survive. Processing such gold poses serious health hazards.

Mercury is an essential tool in some types of gold extraction because of its ability to bind gold particles together. Yet it is also a poison – whether its fumes are inhaled, its particles are eaten through contaminated fish or water, or simply if someone touches it with their bare hands.

Besides lung damage it can lead to memory loss, irritability, depression, kidney failure, tremors, numbness and discoloured, peeling or scaly skin. Extreme mercury poisoning can cause paralysis, coma, or insanity. In a 2018 study measuring blood mercury levels in miners in eastern Cameroon, almost one in 10 (9.1%) of the miners had blood that was chronically intoxicated with mercury.

Yet Marie Louise, a mother of five in her 40s living in Longa Mali, is handling mercury freely as she stands ankle-deep in a pool of opaque mustard coloured water just metres from her front door. Her children stand in the water with her, watching her form a tiny, ladybird-sized blob to sell for $2 (£1.53) for a local dealer. Silvery globules spread into the water as the children splash and rub their eyes, while Marie Louise massages the remaining mercury with her hands.

The Cameroonian mining code forbids the use of mercury for this purpose due to its toxic health effects. Gold mining companies operating here are quick to cite this. Yet, on the ground, the use of mercury is freely observed at many gold mining sites, often just a few hundred metres away from local policemen who are seen slumbering in the shade of mango trees.

Mining companies also say they use pictures to illustrate the dangers of mercury use as a deterrent.

“I know the dangers,” Marie Louise admitted. ”But it’s money. Without this, how will we live?,” she ssays, adding that the children also sometimes use mercury to help with gold processing.

“When we see that the belly is empty, we have to do it in order to eat,” she adds, gesturing to her children.

For Cameroon’s young generation, the gold mining industry is not only claiming lives in accidents in unsecured pits, but also results in many students dropping out of school. One headmaster of a school in Betare Oya told the Guardian that each year, almost half of the students drop out to work in gold mines as soon as the dry season begins in December. The pattern is the same throughout the gold mining areas of eastern Cameroon.

On the ground, the locals say they see few changes.

In Batouri, the abandoned mining pit in which Saustem Brandon Samba drowned remains open, in the same state as when the 12-year-old fell into it, his father said.

“It’s not even secure,” his father Sah says. “Nothing has been done.

“And there are more than 100 others like it nearby.”

“The more I research it, the more I realise that people are taking advantage from people’s ignorance,” says Etoga.

“If it had been a population that had been sufficiently educated, who had a good level of knowledge, it wouldn’t be happening. But there, many people don’t know anything – especially if they spend their time in the mines instead of going to school.

“Some say that gold has brought us so much money, so many millions.

“But if you weigh it against all that we have lost, you will see that we’ve gained nothing. Nothing at all.”

Culled from The Guardian.com