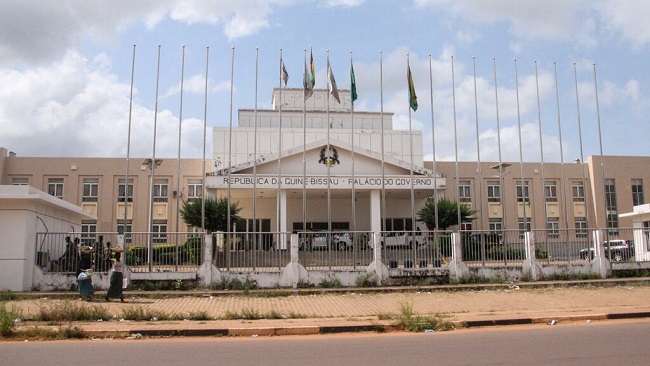 Sustained gunfire was heard on Tuesday near the seat of government in Bissau, the capital of the small coup-prone West African state of Guinea-Bissau, AFP reporters said.

Heavily-armed men surrounded the Palace of Government, where President Umaro Sissoco Embalo and Prime Minister Nuno Gomes Nabiam were believed to have gone to attend a cabinet meeting.

The Palace of Government is on the edge of the capital close to the airport.

People were seen fleeing the area, the local markets were closed and banks shut their doors, while military vehicles laden with troops drove through the streets.

Shortly after the first reports of the gunfire on Tuesday, the West African regional bloc ECOWAS condemned what it described as an attempted coup in Guinea-Bissau.

“ECOWAS is following with great concern the evolution of the situation in Guinea-Bissau…where military gunfire is taking place around the government palace,” the organisation said.

“ECOWAS condemns this attempted coup and holds the military responsible for the safety of President Umaro Sissoco Embalo and members of his government.”

The African Union (AU) said on it was very concerned about what it described as an attempted coup taking place and called on the military in Guinea-Bissau to free detained government members.

“The President of the African Union Commission, Moussa Faki Mahamat, is following with grave concern the situation in Guinea-Bissau, consisting of an attempted coup against the country’s government,” the AU said in a statement.

“He calls on the military to return to their barracks without delay and to protect the physical safety of President Umaro Sissoco Embalo and members of his government and to immediately free those of them who are in detention,” it said.

A United Nations spokesman said on Tuesday that UN Secretary-General Antonio Guterres is “deeply concerned” by reports of heavy fighting in Guinea-Bissau and asks for an immediate end to the violence and for full respect of country’s democratic institutions.

The former Portuguese colony, just south of Senegal, is an impoverished coastal state of about two million people.

It has suffered four military putsches since gaining independence in 1974, most recently in 2012.

In 2014, the country vowed to return to constitutional government, but there has been little stability since then, and the armed forces wield substantial clout.

He was a candidate for a party called Madem, composed of rebels from the African Party for the Independence of Guinea and Cape Verde (PAIGC) which had led Guinea-Bissau to independence.

His chief opponent, PAIGC candidate Domingos Simoes Pereira, bitterly contested the result but Embalo declared himself president without waiting for the outcome of his petition to the Supreme Court.

Late last year, the armed forces chief said members of the military had been preparing to launch a coup while the president was on a working trip to Brazil.

Troops had been offering bribes to other soldiers “in order to subvert the established constitutional order”, armed forces head General Biague Na Ntam said on October 14.

His account was denied the following day by the government spokesman.

In addition to volatility, Guinea-Bissau also struggles with a reputation for corruption and drug smuggling.

Its porous coastline and cultural ties have made it an important stop on the Africa trafficking route. In 2019, nearly two tonnes of cocaine were seized.

The region’s mounting instability is due to be discussed on Thursday at an ECOWAS summit.