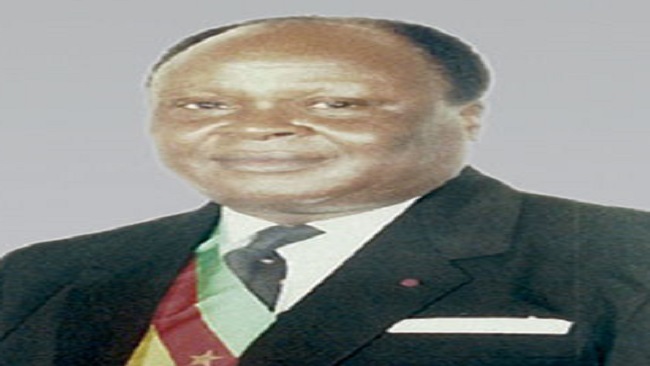 The country lost a true patriot and statesman in the person of Hon Willie Ndep Orock Effiom; former Grand Chancellor of National Orders and former Speaker of the West Cameroon House of Assembly. His was a life of leadership and service to the nation

“No great man lives in vain. The history of the world is but the biography of great men,” once observed the famous British historian, Arthur James Balfour. The Rt. Hon Willie Ndep Orock Effiom; former Grand Chancellor of National Orders and former Speaker of the West Cameroon House of Assembly, who will be committed to mother earth next Saturday, May 12, 2018 in his native Nsanaragati, Eyumojock Sub-Division, in Manyu; was by every measure, a great man in his own right. The passing of Pa Effiom, as he was fondly called, is a great national loss; but it is also an occasion for the country to celebrate a truly great life and a man of virtue. No doubt, his death elicited an effluence of encomiums for a man who ran the race and never stumbled. Born April 3, 1931 in Nsanaragati; the 4th and last surviving child of Pa Obi Effiom and Mama Katching Ojong both of blessed memory, the inevitable end overtook the “Rock of Nsan” in December last year. Pa Effiom was 86 years old.With his passing, Manyu has lost one of its most authentic political voices.A prodigiously gifted man with granite determination, his compelling life story is a profound journey, which took him from the hinterlands of Nsanaragati to Mamfe; where he attended primary school; before a foray into politics that began a public service career spanning over 50 years.Pa Effiom shaped and witnessed Cameroon history; he spoke truth to power and exits the stage a fulfilled man. Befittingly, he will be honored with a state funeral. His family, friends and the entire nation should be proud of his acclaimed virtues.Such are the memories of outstanding men in history.

Every man is unique. There is only one Pa Effiom; who in all honesty and sincerity was not born great. It could not be rightly said either that he had greatness thrust upon him. From all available records, he worked hard and tirelessly for his greatness, in most cases, defying long odds. Orphaned at a very tender age, the young Willie Ndep Orock Effiom worked as an aide to a Nigerian businessman, Mr. Anya and put himself through primary school in Mamfe town. Like many of his generation, he proceeded to the Teacher Training College and graduated as a teacher. He was subsequently appointed Headmaster of Nfuni primary school; from where he launched his illustrious political career built upon rock-solid grassroots endorsement.

As party politics took hold in Southern Cameroons, his charm and gift for leadership raised his visibility and public profile, eventually attracting the attention of KNDP party barons who drafted him as their candidate in the 1959 elections into the Southern Cameroons House of Assembly. At the relatively young age of 28, Pa Effiom was virtually a political underdog. In Mamfe West, he was up against the KNC candidate; the formidable Victoria-based businessman, Solomon Ashu Arrey (later Chief SA Arrey of Ossing) and SE Takunchong of Besongabang who defied party orthodoxy to run as an independent, ostensibly because of his name recognition. Pa Effiom, the political dark horse upstaged the apple cart by winning a landslide. The results according to the Southern Cameroons Information Service Press Release No 249 of January 29, 1959, showed Effiom (4,004 votes); SA Arrey (1,702), and SE Takunchong (297). The political establishment could not but take notice!

It is to his adroitness as a one-man political powerhouse, that as a freshman MP, he was appointed Secretary of Public Works and Transport in the first cabinet of Prime Minister JN Foncha in 1959. After the December 20, 1961 elections, in which he soundly defeated SE Takunchong (CPNC) and SEM Agbaw who ran as an independent, Pa Effiom established himself as a political force to reckon with in Mamfe politics. The West Cameroon Gazette, Vol 2, No 2 showed that Effiom won 5,969 votes (68.1%) while Takunchong got 2,049 (23.7%) and Agbaw 643 (7.4%). In January 1962, he was retained in the cabinet as Secretary for Education, and held other cabinet portfolios such as Agriculture, Forestry and Veterinary, until he left the executive branch of the then West Cameroon government in 1967 following his election as Speaker of the West Cameroon House of Assembly and President of the House of Chiefs; a position he held until the federation was abolished in 1972.

After the West Cameroon gov’t was dissolved in 1972, Pa Effiom returned to Mamfe and was elected Member of Parliament from 1973 until 1990. In 1988, he faced one of the strongest challenges in his political career during the legislative elections featuring the Khaki list, which he headed and the Green list led by DA Wanobi, whom he had mentored. In the end, Pa Effiom fought the political battle of his life and defeated the Green list. It was the last election he would ever contest and although he returned to Parliament where he was elected President of the Finance Committee, his tenure was cut short after Parliament was dissolved and fresh elections called, in the wake of the country’s return to multi-party politics. He was appointed Grand Chancellor of the National Orders in July 1990; a position he held until he retired from government and active public service in 2007.

Although loyalty to friends trumped other considerations, when it came to politics, Pa Effiom was a conviction rather than consensus politician. He never aimed to convince his political opponents;he sought to defeat them. While he neither schemed, nor bulldozed his way to seek power for its sake, Pa Effiom had a strong handshake and a long memory; he was an encyclopedia of events with accurate dates. He remembers all and forgets nothing. He demonstrated a rare courage and determination to succeed in the rough and tumble of politics, where he had to fight several battles. For someone who believed absolutely in himself and his own abilities and trusted his gut instincts, Pa Effiom was, however, no less trenchant in battle.When he went to war against his political opponents, his legendary patience gave him enough staying power and he took no prisoners.The trademark placid poker face he wore like a ventriloquist gave him an unpredictable mien of sorts and reinforced the mythology of his persona, creating an overwhelming feeling of awe. People whispered that it was not a wise man that will oppose whatever Pa Effiom wanted in politics and there was a long list of political casualties as credible deterrence.He exuded trust and loyalty and his principled leadership and selflessness confounded even his most ardent critics and detractors.

Pa Effiom was a very private family man who shunned publicity, but he was also an unapologetic conservative and traditional iconoclast, who feared no one and was very comfortable in his own skin.He had no time for women liberals;his formidable wife, Lucy Tabe Effiom, who passed away in 1998 after a protracted illness was never allowed to work.After the passing of his first wife, Pa Effiom remarried Gladys Oben Effiom. A man of honor even in death,Pa Effiom is survived by eight children: Ria Enaw (USA), Raymond Ayem Effiom (USA), Dr. Charles Effiom (Britain), Dr. Bisong Effiom (Britain) Obi Bernard Effiom (USA), John Okem Effiom (South Africa), William Ofa Effiom (Mamfe) Ntui Effiom (Yaoundé);eight grandchildren, nephews, nieces, cousins and family friends to mourn him.

People who saw Pa Effiom from a distance will never know he was more than just a rigid politician. A great conversationalist with a roaring, infectious laughter, Pa Effiom was a light-hearted man of fulsome humor and a man of many worlds; a universe of politics and public service, all neatly woven by a life of quiet philanthropy and sacrifice for his people which he did without any fanfare or publicity.Having experienced poverty and financial hardship firsthand as a young man, Pa Effiom had a naturally generous and feeling heart. He lived for others. He troubled himself very little about material things.His life also reflected a truth to self-personal philosophy. Where many would have sniffed out dubious means from our corrupt system to enrich himself and family members, Pa Effiom was tenacious in his moral responsibility.He left a worthy footprint on the sands of time as an inspiring example of fortitude, magnanimity and dignity and his revulsion for materialistic wooliness, profligacy and vulgarity on the part of public officials was without measure.

As a member of the CPDM party where he played the role of wise man, Pa Effiom witnessed some of the checkered parts of Cameroon’s political history, notably the unresolved Anglophone question.With his demise, certainly departs a huge slice of Anglophone history, but in the wake of Biya’s anti-Anglophone war, Pa Effiom displayed a posture that many have construed as aloofness, from a man whom character, history and providence placed in the firmament of eminence; and he served the nation well. When many had thought he would deploy his political capital and acumen to help resolve the Anglophone problem, Pa Effiom’s silence was deafening. His usual taciturnity, iron-cast audacity and moral strength were largely unfelt even as soldiers waged a campaign of terror against his own Manyu people. This was inconsistent with a moral disposition that normally would require him to speak out. By acting otherwise, he placed himself on the wrong side of history.

That notwithstanding, his legacy of personal integrity represents a high value system difficult to reestablish in a country embroiled in governance anomie and blatant moral bankruptcy. Politicians and those seeking leadership positions should see in Pa Effiom’s life an open book from which to learn the wit and wisdom of selfless patriotism. Indeed, even older generations of politicians like Nfon Mukete, Enow Tanjong, Mafany Musonge and Achidi Achu, rather than burn themselves out straddling the political space with younger aspirants, should, like Pa Effiom, cultivate the disposition of statesmanship and maintain an eloquent taciturnity of being kingmakers and oracles of the polity. To Cameroonians who are distraught and overwhelmed by the vicissitudes of Cameroon’s rudderlessness as well as those who are plundering the nation’s resources to amass needless and scandalous wealth, Pa Effiom’s life is a lesson in contentment and serenity.The “grandmaster of Manyu politics” has paid his dues. He leaves the stage a fulfilled man and totally at peace with himself.“There is no cause for birth and death, save to enjoy the interval,” wrote George Santayana. Cameroon has not only lost a father-figure but also a symbol of its rich history and character.Pa Effiom will be sorely missed.