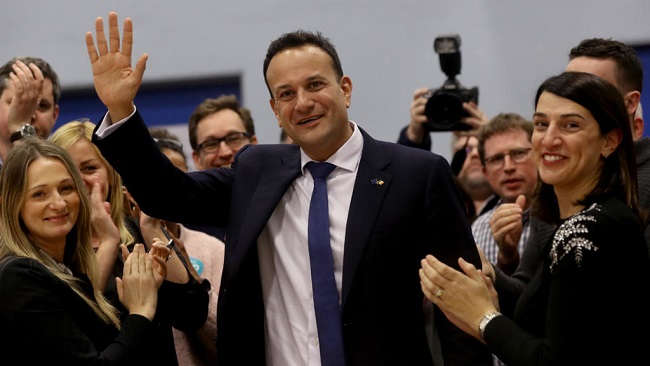 Irish Prime Minister Leo Varadkar resigned on Thursday, but stayed on as interim leader while the country’s three main parties battle out coalition talks after an inconclusive election.

Varadkar tendered his resignation as taoiseach, or premier, to President Michael Higgins after the first sitting of Ireland’s lower house of parliament since an 8 February election which radically recast the political landscape.

“In accordance with the constitution, the taoiseach and the government will continue to carry on their duties until successors have been appointed,” a government statement said.

Parties in the 160 seat chamber — the Dail — convened and nominated candidates to lead a new government as taoiseach but with none commanding a majority it was adjourned until 5 March.

At 45 it was far short of the 80 needed to take office but it was a symbolic victory reflecting the surge the nationalist party enjoyed in the election.

Sinn Fein, which once served as the political wing of paramilitary the Irish Republican Army (IRA), became the second biggest party with 37 seats — breaking the historic duopoly of centre-right parties Fine Gael and Fianna Fail.

“The people who vote for us aren’t going anywhere,” said McDonald.

“We have made a commitment to them to represent them well and to make our very best effort to deliver that government of change — and that is precisely what we intend to do.”

‘A government for change’

McDonald outstripped the 36 votes backing Varadkar to continue as prime minister after his Fine Gael party slipped into third position in the election with 35 seats.

“The onus is on those who have made enormous promises of change to people during this election, who are entrusted with that mandate to bring a programme for government to the Dail for approval,” Varadkar said in parliament before departing to resign.

“If they cannot, they should say so and be upfront and honest about their failure, and the empty promises they made.”

Micheal Martin’s Fianna Fail party won the most seats in the election at 38, but suffered significant losses on their 2016 wins.

He received the backing of 41 lawmakers in Thursday’s contest.

Sinn Fein has been historically associated with the IRA which fought British rule in Northern Ireland for decades until the late 1990s, when a peace agreement largely ended violence that left more than 3,000 dead on all sides.

It won the popular vote with 24.5 percent of first preference ballots and picked up 14 seats by attracting voters with a campaign focusing on Ireland’s housing shortage and health crisis.

But its flagship policy on Irish unity is likely to be a top issue if it gains power.

It wants a referendum on uniting the two parts of the island within five years.

At least three parties will be needed to form a majority government in the Dail.

Fianna Fail and Fine Gael have both ruled out working with Sinn Fein, in part because of their association to past violence.

Varadkar told state broadcaster RTE on Monday he was prepared to go into opposition.

Meanwhile, Sinn Fein said Wednesday it was “intensifying” negotiations with smaller parties and independents seeking “a government for change”.

Talks may take some time and may result in a new election in which Sinn Fein could emerge as a favourite.

After a 2016 vote it took 70 days for a minority coalition government to form under Fine Gael, which was supported in a confidence and supply agreement by Fianna Fail.