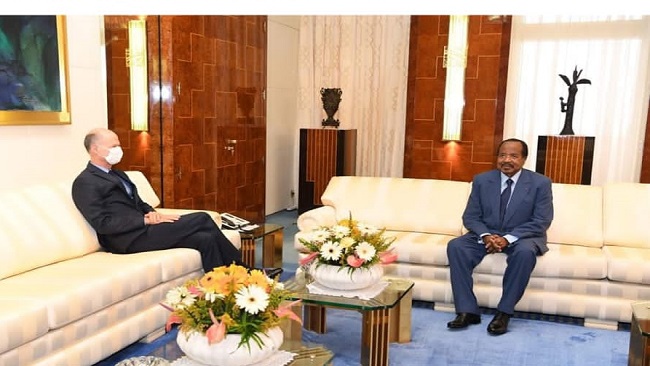 French Cameroun head of state, Paul Biya, is only 87 years old, but his recent disappearance from the British Southern Cameroons and French Cameroun political scenes following the outbreak of COVID-19 has pushed many political commentators to be concerned about his bill of health.

The butcher of Yaoundé is known for spending millions of Cameroonian tax payer’s money to sustain his lavish lifestyle in a five-star hotel in Geneva, Switzerland. There are several other elements that have Cameroonians questioning if the 87-year-old is still alive.

Biya has a horrible drinking habit and despite his age, he has continued to poison himself in the hope that alcohol will help shield himself from the furious attacks from his compatriots.

President Biya’s inclination to red wine and champagne is no secret.  He consumed so much wine during the OAU summit in Yaoundé and forgot that he had to welcome the Great Nelson Mandela at the Nsimalen International airport.

Mandela arrived on time and Biya’s acolytes rushed the then Prime Minister Simon Achidi Achu to meet him. It needed the intervention of French President, Jacque Chirac, to get Mandela back in Yaoundé for Biya to make up for his shameful costly mistake.

Alcohol is one of Biya’s vices as observed by his late wife Jeanne-Irène Biya. Like every other Beti, Bulu and Eton citizen, Biya loves his liquor.

The presidency spends millions of US dollars each year on alcohol, and Biya prefers expensive brands. He mixes it with champagne and this gives him the false impression that he is a chemist.

It is not only alcohol that is Biya’s Achilles heels. He also loves good food and has been eating himself to death.  BBC Focus on Africa reported more than two decades ago that Biya was limping, likely due to a strain in his legs.

The BBC article stated that Biya had pain and inflammation from too much uric acid in the joints. His love of red meat has caught up with him and when he gets flares, he cries like a baby.

It became evident in Paris during Biya’s recent meeting with French President Emmanuel Macron that Biya was far more concerned with feeding himself than helping his people get out of poverty. Biya has been hiding for 37 years as head of state.

And while that could be a way to guarantee his continued stay in power, it could also just be a bad political habit.

Cameroon Intelligence Report understands that President Biya has difficulty sleeping. After carrying out high-level killings and purges in his own regime and jailing prominent ruling CPDM barons, including Prime Minister Inoni, Biya now fears for his own life even he is by the side of his grave.

Allegedly, this fear keeps him up at night, and he is not getting enough sleep. Indeed, his current Minister of Territorial Administration, Paul Atanga Nji  noted that Biya knew when a cabinet minister went to downtown Yaoundé to purchase a bottle of wine.

His much published meeting with the French ambassador, Christophe Guilhou today in Yaounde as a response to declarations made by Prof. Maurice Kamto has been dismissed as a French political game to keep the CPDM regime alive and active.

Biya is actually suffering from insomnia and other age-related ailments

Biya’s family is paranoid. His late elder brother never got a tumor removed from his body because he was afraid boarding a plane to France and was too worried about being killed by doctors in Yaoundé.

Whether he sleeps or not, he has no control over death. Living long in pain may only be nature’s way of getting back to a man who has had more than his fair share of life by crook.

He has never won an election. He runs away from everybody, thinking that everybody is his enemy. But his real enemies are Ahidjo’s ghost that constantly visits him and the liquor that has ruined his health.

He still has time to repent before leaving this world. If he keeps on holding back his thoughts, he will keep on suffering in silence and dying gradually.