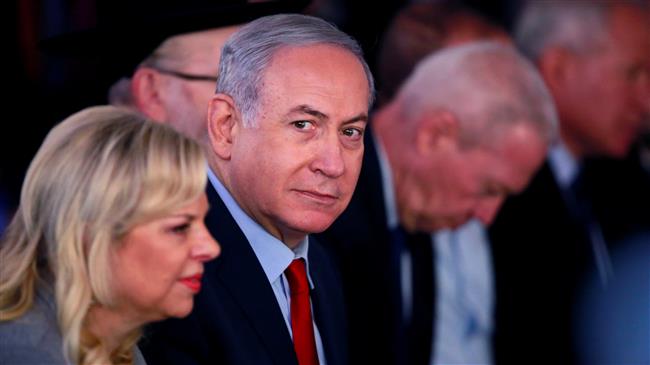 Police have questioned Prime Minister Benjamin Netanyahu for the second time in a corruption case involving Israel’s largest telecommunication company, Bezeq, as he is embroiled in two other cases.

Police assert that Bezeq owner Shaul Elovitch had instructed the Walla news website, which is fully owned by the telecom company, to provide favorable coverage of Netanyahu and his wife in return for favors from communications regulators.

According to Israeli media, Netanyahu’s spouse and son would be interrogated separately in the telecoms investigation over their relationship with Bezeq’s owner and his spouse.

Police, who have yet to make a recommendation about charges in the case, reportedly questioned the prime minister in his official residence in Jerusalem al-Quds.

Shlomo Filber, the former director general of the Communications Ministry, and Nir Hefetz, a former spokesman of Netanyahu, have agreed to serve as the regime’s witnesses in the case.

Israeli police investigators have also been grilling Netanyahu for corruption over his involvement in cases 1000 and 2000. The final decision about whether to prosecute him rests with the Israeli attorney general, which could take months.

Case 1000 revolves around alleged illicit gifts given to Netanyahu and his family by different businessmen, most notably the Israeli-born Hollywood producer Arnon Milchan.

The Israeli prime minister and his wife, Sara, claim that the value of the items was significantly lower than reported, and that they were only “trifles” exchanged between close friends.

Case 2000 focuses on an alleged clandestine deal made between Netanyahu and Yedioth Ahronoth publisher and owner Arnon “Noni” Mozes, in which the 68-year-old chairman of the Likud party promised Mozes he would support a bill to reduce the circulation of Yedioth’s main commercial rival, the Hebrew-language freebie Israel Hayom, in exchange for favorable coverage of himself in Yedioth.

The political survival of Netanyahu’s four-term prime minister is greatly at risk over the corruption and bribery probes.