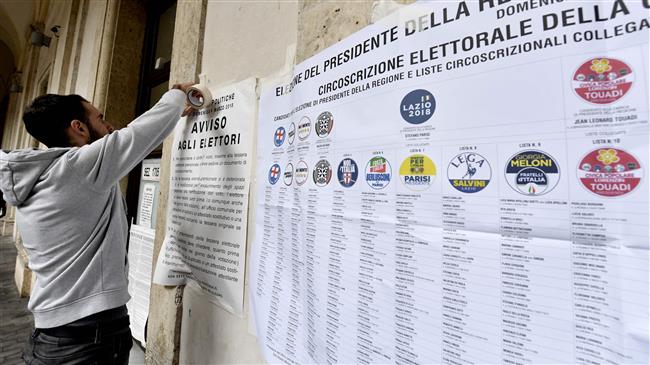 Italians are taking to the polls to cast their ballots in general elections that would determine the makeup of the country’s parliament and its next government.

The 81-year-old ex-PM cannot hold public office due to a tax fraud conviction but has allied himself with the anti-immigrant League Party to be able to compete in the race.

Under a new law passed last year, roughly a third of the seats are to be selected by the direct “first-past-the-post” system, with the remainder to be selected by proportional outcomes divided among allied parties and coalitions.

Each party would need at least 40 percent of the votes to command an overall majority of the seats in both chambers of the parliament.

Opinion polls have indicated that Berlusconi’s coalition is in the lead but will not win an outright majority, and Five Star has been widely projected by pollsters to emerge as the single biggest party. The ruling center-left Democratic Party, led by former prime minister Matteo Renzi, is predicted to finish in third place.

The general elections are held amid concerns over immigration and the economy.

The International Organization for Migration (IMO) says more than 600,000 refugees and asylum seekers have made perilous journeys from Libya across the Mediterranean to reach Italy since 2013. The huge influx of refugees has worried many Italians and politicians, triggering violent clashes between far-right supporters and anti-fascist protesters.

Italy’s economy index is almost six percent lower than a decade ago, and some 18 million people are at risk of poverty, with unemployment standing at 11 percent.

Experts and analysts have expressed optimism that the Sunday general elections under the new system will pave the way for reforms to create an economy boost and a hike in the employment rate in the European country.

The official results of the elections are expected to be released in the early hours of Monday.