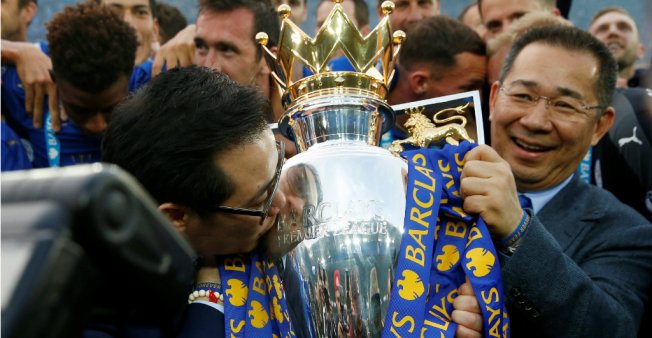 Football club Leicester City has confirmed that the club’s owner Vichai Srivaddhanaprabha died in a helicopter crash on Saturday, along with four others.

The helicopter belonging to the billionaire crashed and burst into flames in the stadium carpark shortly after taking off from the club’s pitch.

The club confirmed on Sunday that none of the five people who were on board survived, and said in a statement, “In Khun Vichai, the world has lost a great man. […] Leicester City was a family under his leadership. It is as a family that we will grieve his passing and maintain the pursuit of a vision for the Club that is now his legacy.”

Leicestershire police said that no one else is believed to have been injured from the crash. Leicestershire Police named the four other victims they believe to have died in the crash. They said that two were members of Vichai’s staff: Nursara Suknamai and Kaveporn Punpare. Also killed were pilot Eric Swaffer and passenger Izabela Roza Lechowicz.

Images released after the crash showed smoke rising from the fiery wreckage in the carpark at King Power Stadium the scene of unbridled jubilation after Leicester’s against-all-odds Premier League title victory in 2016.

Freelance photographer Ryan Brown, who was covering Saturday’s 1-1 draw with West Ham, told BBC Radio 5 Live that he saw the helicopter rise out of the stadium before it crashed.

“Literally the engine stopped and I turned around, and it made a bit of a whirring noise. It turned silent, blades started spinning and then there was a big bang,” he said.

He said he saw “a huge fireball” when he ran to the scene.

None of the identities of the pilot or passengers was revealed, and there was also no information about whether anyone on the ground was injured.

“We are assisting Leicestershire Police and the emergency services in dealing with a major incident at King Power Stadium,” the club said in a statement.

As expressions of concern poured in from around the football world, England legend Gary Lineker, a former Leicester player and host of the BBC’s Match of the Day, tweeted: “That was the most difficult @BBCMOTD I’ve ever hosted… A terrible tragedy. Heartbreaking.”

Leicester footballers Jamie Vardy and Harry Maguire both tweeted praying hands emojis and West Ham defender Pablo Zabaleta, who also played in Saturday’s game, tweeted: “My thoughts and prayers are with all those involved in the helicopter accident at Leicester City.”

Nualphan Lamsam or Madam Pang, an influential figure in Thai football who manages the national women’s team, sent “moral support to Vichai and family” in a post on Facebook.

Vichai bought Leicester City in 2010 and became chairman the following February, pouring millions into the team and becoming a beloved figure in the club and the city a feat not always achieved by the Premier League’s foreign owners.

“Thoughts and prayers with all particularly owners who’ve done so much for Club and our City,” Leicester’s mayor Peter Soulsby tweeted.

Sky Sports said the helicopter took off from the pitch between 1930 and 1945 GMT but developed problems shortly afterwards with its tail rotor.

The local ambulance service said it was alerted at 2138 GMT.

“We sent a doctor, two paramedics in ambulance cars, a crewed ambulance and our Hazardous Area Response Team, with the first resource arriving within two minutes of the call,” it tweeted.

It was under Vichai’s ownership that Leicester crafted one of the biggest fairy-tales in English football history by winning the 2015/16 Premier League, having started the season as 5,000-1 outsiders for the title.

Vichai made major investments in the club after his purchase, returning them to England’s Premier League from the second-tier Championship in 2014.

They initially seemed outclassed by richer and more established clubs from London, Liverpool and Manchester, languishing at the very bottom the table for most of the 2014-15 season.

The Foxes, as the team are nicknamed, then engineered what fans now fondly refer to as the “Great Escape”, winning seven of their last nine matches.

They ended up finishing 14th, securing themselves another season in Europe’s richest league in 2015/16.

But not even their most devout fans could have imagined what happened next.

Vardy, signed from non-league Fleetwood Town, scored in 11 consecutive matches, propelling the men in blue to a title without parallel in Premier League history.

The success also qualified them for the first time for the lucrative Champions League, the pinnacle of European football played by the continent’s most successful sides, including Barcelona and Real Madrid.

There, Leicester City defied the odds yet again, winning their group before eventually losing their quarter-final 2-1 over two legs to Atletico Madrid.