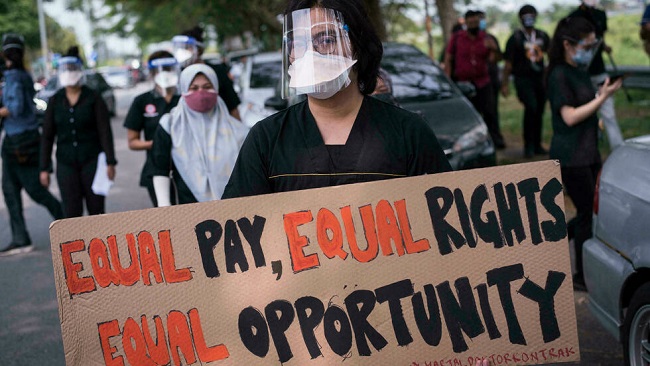 Dressed in black and holding signs with slogans including “equal pay, equal rights, equal opportunity” and “we are your future specialists”, they protested at medical facilities nationwide.

The doctors are on contracts for a set period and say their treatment is worse than that of permanent government staff, even as they have found themselves on the frontline of the fight against Covid-19.

They complain of a lack of job security, poor benefits and that very few are eventually offered permanent positions.

We want “equal rights, to be a permanent doctor,” said a medic at a government hospital that treats virus patients outside Kuala Lumpur.

“We would definitely not be here if we were treated fairly… we should be appreciated for what we do,” the doctor, who spoke on condition of anonymity, told reporters.

The medic was among dozens who took part in the action at the hospital, which lasted around half an hour.

Local media reported that several hundred participated across the country, but some doctors complained they were threatened by police and senior hospital staff in a bid to halt the protests.

Those involved said senior doctors took over their duties before they walked out, to ensure that patient care was not jeopardised.

Malaysia is currently battling its most serious outbreak, driven by the highly contagious Delta variant. Officials have reported over one million cases and about 8,000 deaths.

There are over 23,000 doctors on these contracts in Malaysia — about 45 percent of the total medical doctors in the public healthcare system, according to official estimates.

Last week, the government said it would extend junior doctors’ contracts for up to four years in a bid to forestall the protests.

But they stopped short of offering permanent jobs, and the organisers of Monday’s walkout criticised the move as “short-sighted”.