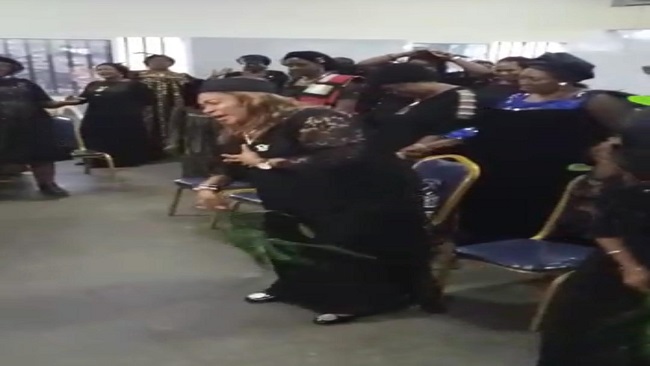 Videos of Manyu women crying in Yaoundé following the burning down of the Mamfe General hospital by unknown arsonists have been trending online and many people have been asking very serious questions about the rationale behind such an action when many in the Division need more than tears.

Crying is not always a bad thing. It is an expression of a feeling which could be positive or negative. That is why a famous philosopher said that “crying is the noble language of the eye.” The Manyu women in Yaoundé were, for sure, demonstrating their frustration and anger with whoever undertook the ignoble action of robbing more than 100,000 people of quality healthcare in a region which is already in the grip of multiple issues.

Mamfe has no lights. Its water system clearly belongs to the distant past. It is still a miracle that water-related illnesses have not yet popped up in the town, especially cholera which has wreaked havoc in Limbe and Buea, two towns whose water supply systems are by far better than what passes for a water system in Mamfe.

There is no doubt that Manyu women in Yaoundé and indeed across the world love their native Manyu whose capital is Mamfe but converging on a small town hall in Yaoundé to shed tears because of a massive disaster that needs more financial resources than tears is indeed mind-boggling.

The crowd in Yaoundé a few days ago was impressive. Many of the women showed up with some of the finest worsted fabric the world could boast of. The heels of their shoes were so long and beautiful that you could think they were designed for a purpose and by the goddess of beauty. Their expensive eyewear spoke volumes of their love for earthly things. There was no symptom of poverty on any of the women. The occasion seemed to have been an opportunity for some of them to display their wealth and their love for material things. Indeed, that was not the right attire for mourning women.

A lot of tears were shed, but what is baffling to many minds is the real objective of those tears. But since no human being is a god, these women can be given the benefit of the doubt. The world can cut them some slack, especially if they transform those tears into real concrete actions. The walls of the cultural center on which they converged had been transformed into wailing walls and many of the women wept and cursed those responsible for the heinous crime.

Their coming together clearly demonstrated that there was power in numbers and these women can use their numbers to breathe faith and hope into the desperate people of Mamfe. The Mamfe population needs help and tears alone will not solve their mounting health issues that are staring them in the face.

Manyu women across the globe can use their numbers to mobilize resources which could be used to alleviate the pain of their fellow women in Manyu Division. The damaged hospital was where many women were delivered of their babies. With this facility up in smoke, the future looks very bleak for young women who look forward to having their own families in Mamfe.

While rebuilding the damaged hospital may not be the responsibility of the people of Manyu Division, it must be remembered that the primary beneficiaries of the quality healthcare that was provided by the General Hospital was the local Manyu population. It certainly will take a lot of time for the burned hospital to be rebuilt, but the women of Manyu can come up with the finances that will help local women have access to healthcare – not by wearing expensive clothes and crying, but by make huge sacrifices.

They could mobilize resources to enhance the capacity of the Preventive hospital which has now been transformed into a full-fledged hospital without proper equipment. Arrangements could be made with the two local clinics in the town for pregnant women and nursing mothers to receive the care they need at affordable prices in those two clinics. This is not an impossibility, and it will not cost anybody an arm and a leg.

Manyu women organizations such as MOHWA, which have brought together thousands of women, could depart from their original goal of promoting the culture of the region to raising funds for a cause that will put smiles on many faces. It is always a pleasure to see women leaving the United Kingdom to the United States to attend a MOHWA occasion, but it is also disheartening to know that ever since the Mamfe General Hospital went up in smoke, MOHWA has not issued a statement, nor has it even tried to raise funds for other women whose future is in danger because of the disaster brought onto the population by some lawless and devilish persons.

MOHWA should not only be a place to show off. It should be a medium through which women can help other women, especially those who need medical attention in Manyu Division.  In this unfortunate situation, every bit will go a long way in alleviating the pain of the residents of Mamfe. The Manyu women in Yaoundé just like their sisters in the Diaspora should be leading key resource mobilization efforts to reduce the pain brought about by the burning of the Mamfe General Hospital.

This is the time for Manyu women to demonstrate their sense of purpose. They can at least skip some of the parties organized by their groups just to help those who are at home. They can also forget about the long heels they want to buy and the expensive clothes and hairpieces just to bring joy to other people. They can cry if they so wish, but the ultimate way of demonstrating love and concern in this context will be to participate in fundraising efforts which will reduce the pain of those whose lives hang in the balance due to the massive fire which gutted the Mamfe General Hospital. Manyu women have to act now, if not, theirs will be the kingdom of tears for many years.