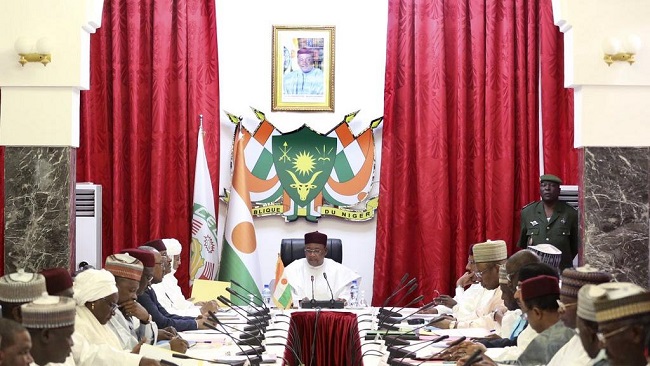 Niger’s president has fired the army’s chief of staff after attacks against security forces have killed at least 174 security force members since December.

President Issoufou Mahamadou’s action on Monday came after the death toll from an attack by Islamic extremists on Niger’s military last week rose to at least 89, making it the most deadly attack of its kind in years in the West African nation.

The fatalities from the attack Thursday rose dramatically from the 25 soldiers that the government initially said were killed last week.

In addition to the soldiers killed in that attack on the Chinagrodrar Advanced Military post near the border with Mali, at least 77 extremists were killed by Niger’s army and its foreign allies, most notably France and the United States, according to a statement issued Sunday by the government.

The military’s response, which included air support, pushed the extremists from Niger, the government said. There will be three days of national mourning beginning Monday, the government announced.

Chief of Staff Lt. Gen. Ahmed Mohamed will be replaced by Brig-Gen. Salifou Modi, who was the military attache for Niger in Germany, the presidential statement said Monday. He also dismissed the Secretary General of the Ministry of National Defense and the Chief of Land Staff.

No group has yet claimed responsibility for Thursday’s attack, but the attack bore the hallmarks of an Islamic State-linked group that said it was behind the December ambush near the town of Inates that killed 71 soldiers and was previously the most deadly attack of its kind in Niger in years.

“The government calls on the population to be more vigilant, more serene and united, and reaffirms its determination to continue the fight against terrorism until the final victory,” the government statement said.

The increase in the death toll as a summit opens in Pau, France, that is to be attended by French President Emmanuel Macron and the leaders of Burkina Faso, Chad, Mali, Mauritania and Niger Mauritania.

Those countries make up the G5 Sahel groups that are working with France against the threat of extremists in the region. The crisis of extremist violence across the Sahel is deepening, particularly in Burkina Faso and Mali.

Islamic extremists also targeted and killed 14 Niger security force members who were escorting election officials on Dec. 25 near Sanam, about 200 kilometers (124.27 miles) from the capital of Niamey. Officials from the national electoral commission were in the area to conduct a census before next year’s vote.

Niger’s military has received training for years from both American and French forces, but these attacks underscore the threat extremists still pose.