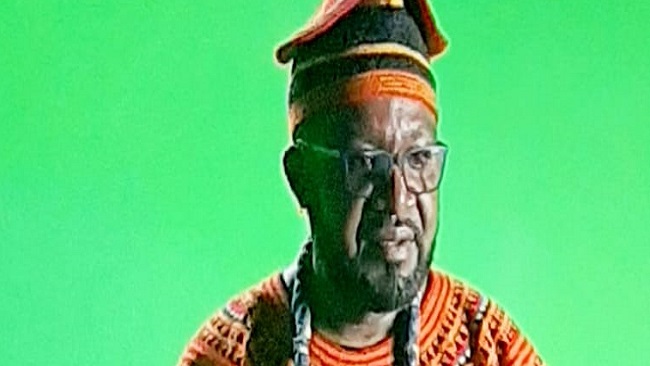 I bring you revolutionary greetings from your leader, President Sisiku Ayuk Tabe, and his team in detention. Their bravery is the anchor that givesour nation hope in moments of quiet despair in this journey we have embarked upon. Tomorrow marks the 4th anniversary of the restoration of our independence. Since that historic day on 1stOctober 2017, we have seen over 20,000 of our fellow citizens massacred, 521 of our villages burned down, and over one million people displaced from their homes.

The Southern Cameroons was one of the territories set for decolonization in the UN decolonization agenda. Britain’s devious handling of it and the British wheeling and dealing at the UN in 1959 and 1960 caused a great historical injustice to the people of the Southern Cameroons. This four-year-old war in Ambazonia was unleashed on us by Paul Biya in November 2017 after we affirmed our independence on 1stOctober 2017.

To attain freedom, humans must willingly and vigorously challenge what despots, colonialists and neo-colonialists impose upon them. We must choose between the challenging but necessary task of fighting for our freedom and the temptation to ignore our duty and hope for the best. The choice to move this struggle forward is on all of us. The solution is well within our grasp, but if we stop midway, we will send a signal of decline to our enemy.

Fellow Comrades, as we engage in our independence day celebrations around the globe, your Interim Government recommends that all our people in Ground Zero and Ground One remain vigilant and sensible in the decisions they make. Over the last two weeks, there was a lockdown of Ambazonia, announced by some impostors in the Diaspora. The Interim Government wants to apologize to all who suffered needless pain due to this poorly conceived and dreadful initiative. Collectively, we must consider the wellbeing of our people on the ground in any decisions we make, and the Interim Government regrets this continuous attempt by foes from within to undermine our struggle. Regrettably, the workings of the United Nations are fundamental but foreign to many of our so-called leaders in the Diaspora.

Fellow Ambazonians, our forces are getting the training and material support they need, and your Interim Government is making available to them the tools they require for combat operations. There is a new attitude towards serving in the ranks of our restoration forces, and I salute the great ability and demonstrated bravery of our freedom fighters.

Fellow Ambazonians, last week, the terrorist enemy desecrated our city of Bamenda. He sneaked in under heavily armed cover, hiding in an armoured vehicle. He held a one-way traffic meeting during which he blew a lot of hot air. Then he got his pre-owned moving coffins to edge their way into the hinterland of our territory labouriously. Those coffins on wheels carry hapless non-Bulu-Ewondo conscripts sentenced to death by being sent to our territory. Our security services monitor every day and night the movement of the enemy in our territory. I want to repeat the counsel of wisdom that diplomats and many others have given since 2018 to the Yaounde old man and despot;the corrupt, rotten, tribal, oppressive, tyrannous and tired Yaounde ethnic regime in the throes of demise can never win this war in a hundred years. Yaounde and its tribal warlords must know that there is nothing as powerful as the human will and spirit. Not even armoured tanks! We have recently heard them say Federalism is not out of the question. I have news for you in Yaoundé: Federalism might not be out of the question for you, but Federalism is out of the question for Ambazonians.

To the people of French Cameroun, we seek not continuous war with you but intend to live in harmony as peaceful neighbours. Your country obtained its independence on 1st January 1960, and the Southern Cameroons was not a part of that composition. Southern Cameroons has internationally recognized borders that must be recognized and respected. I urge you to liberate yourselves. I urge you to claim and exercise your inalienable right of self-determination. End your situation of being held captive by an illegitimate and cruel regime. Stand up for peace and justice. Champion the process of pacific settlement that tomorrow will enable our two nations to co-exist peacefully and in a spirit of good neighbourliness. There will be neither peace nor security in your nation for as long as your military continues to kill our people, rape our women, destroy our property and occupy our land illegally.

Fellow Ambazonians, we face a powerful and complex enemy backed by France, but we must not falter. They have powerful lobbying machinery, but we have truth on our side.  We find ourselves in this state as a result of failing to act over the last sixty years. Our independence is no longer a future hypothesis or a historical burden; it is on us here and now.

Fellow Ambazonians, when Justice Ebong, Chief Ayamba,Fon Gorji Dinka, Mola NjohLitumbe, stood against this tyranny and the monster in Yaoundé, they had not as many resources as we have today. So, we must live up to the standard of courage they demonstrated. Our quest for freedom holds the promise of changing our history as a people. There have been risks and challenges over the last four years, and results take time.

Blood, money and energy must be sacrificed for us to attain our freedom. If we stop now, we have chosen servitude and slavery instead of freedom and independence. And that we shall not do. Happy Independence Day 2021. God Bless the Federal Republic of Ambazonia.