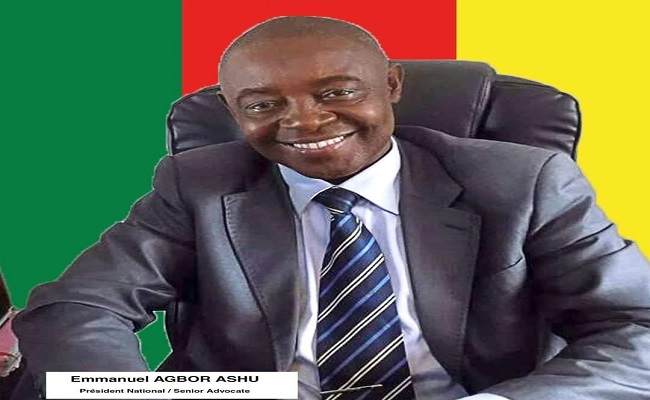 Of Barrister Emmanuel Agbor Ashu, attacks on the Interim Government and the Ambazonian people 0

Rejoinders to well researched write-ups provide helpful feedback on how the reading public appreciates an article from any credible publication. A rejoinder also offers an opportunity for any person who is the subject of a detailed investigative report to defend themselves or present contrary facts if they deem any part of a publication inaccurate or biased.  Under the title “Unmasking Barrister Emmanuel Agbor Ashu”, Cameroon Concord News Group made public a report on 25 September 2021 on all its media outlets.

The article was frank, candid and also provided a thoughtful key to understanding the dubious role currently being played by Barrister Agbor Ashu deep within the Southern Cameroons struggle and our readership has heaped praises for its meticulousness. However and by some strange happenstance, Barrister Emmanuel Ashu has taken issue with the report. But instead of presenting a rational rejoinder countering the arguments raised for the better understanding of the public, the French Cameroun based man of law has resorted to Facebook and TV studios in French Cameroun to present alternative truths and launched vicious and malicious attacks on the credibility of the Cameroon Concord News Group and its cream of well trained media experts.

Recently, Barrister Emmanuel Ashu said somewhat ridiculously, that the Cameroon Concord News Group‘s story on his exploits and treachery was akin to blackmail. This begs the question; does the barrister understand what blackmail is? His self-declared importance in a third-division enclave like Douala has given him the false impression that rational Southern Cameroonians in the diaspora would waste valuable time, money and energy on blackmailing a ruffian and unreliable loose cannon like him.

Barrister Emmanuel Ashu has spent the last few days reciting his overhyped and outdated pitiful so-called achievements to readers on Facebook and other social media platforms rather than address abundant and humiliating facts unpacked in our report.

The barrister has a reputation for making a mess out of every situation. And he has lived up to that standing again with flying colours. Demonstrating both his desperation and unfortunate inclination towards lies telling, over the last week, the barrister wrote amongst many incoherent statements that, “is it journalism to bundle a heap of lies and defamatory assertions spiced with hatred about a person you know nothing about?… I am a legal icon with a proven track record backed by 38 years of very legal practice….I am the best criminal lawyer in Cameroon…Politically, founding father of the SDF…etc.”.

Our flat write up stated that “Barrister Emmanuel Ashu requested that the Interim Government of Ambazonia(The IG) pay him CFA 2.5 billion, buy him a new car, and furnish an office in Douala for him; as compensation to lead a potential legal defense for the NERA10.” Barrister Ashu has still not challenged the correctness of this report. Instead, he has presented a lousy and farfetched excuse that he asked for CFA 2 billion from Sako and the IG to defend the NERA10 in Yaoundé. He revealed, somewhat misleadingly, that his primitive and cheap design for the NERA 10 was putting together a team of 10 lawyers to work for two years. How did he know that the lawsuit against the accused would last two years? We of this publication are calling on Barrister Agbonde to set the records straight by publishing his communications on this matter with the Ambazonia Interim Government.

The report inter alia stated that in the early days of the SDF, the barrister took Chairman John Fru Ndi to his village in Manyu for a visit. The SDF Chairman “did not spend an hour in Ewelle village because Barrister Ashu had nowhere to host the visiting SDF delegation.” The man of law has neither refuted this claim nor presented documents as evidence that he owns a dwelling in his village. As a man of law, Barrister Ashu is aware that one persuades a judge or an audience with hard evidence, not hot air on a TV studio or Facebook posts.

Cameroon Concord News Group’s reporter in Douala indicated that in 2015, she met Barrister Emmanuel Ashu in “unpardonably tattered shoes, a pair of trousers with countless patches in them, a dreadful body odour, and he looked desperately hungry”. Again, Maitre Ashu as he loves being referred to in French Cameroun has not refuted this claim. Last week, the ‘Senior Barrister’ was spotted wearing a coat of many colours on a French Cameroun TV appearing like Petit Pays where he put up a less-than-spirited defense of his record and integrity. To be accurate, Maitre Ashu on that stage simply needed a band like the Sans Visa to give him the full status of a pro Biya comedian.

It is common knowledge that under Paul Biya’s CPDM crime syndicate, standards and patriotism are in very short supply.  But the fact that Barrister Emmanuel Ashu now claims to be the best criminal lawyer in Cameroun is a considerable worry that cannot be dismissed as sheer flippancy. His record tells a completely different story and like our Douala City correspondent rightly puts it, “during his more than 30 years career, he has either been caught committing the same errors or falling into spectacular new ones.” This now explains why he is always around television and radio houses pontificating on political matters that bring him nothing in return.

Our report was unambiguous that Barrister Emmanuel Ashu belongs to an unenviable club of Manyu citizens in their sixties who have not contributed an iota of development to their villages. A close acquaintance of the barrister has confided in our Douala Bureau Chief over the last few days that the barrister is a symbol of ridicule within his clan due to his financial inadequacy and unreliable tendencies.

The barrister has also not rebutted our report that he “owns” a scam of a political party in French Cameroun while claiming to walk shoulder-to-shoulder with Ambazonians. The barrister has now confirmed that he stands for a Confederation in the Cameroons, which is wholly inconsistent with the vision of the people of Southern Cameroons/Ambazonia. The $50,000 question is: why has it taken the man of law five years to make this position public?

Late Barrister Ben Muna, Barrister Halle Nico, Barrister Akere Muna, and many other Southern Cameroonian geniuses have distinguished themselves as legal giants on the national and global stage but never arrogated the title of Senior Barrister to themselves. For Barrister Emmanuel Ashu, a riff-raff and legal embarrassment to paint himself as such, betrays some ignorance and a lack of understanding of the Anglo-Saxon academic and professional traditions.

Agbonde Emmanuel Ashu has failed to present to both Cameroon Intelligence Report and Cameroon Concord News a rejoinder that persuades the public and our readers, in his own words, that this publication had purposely or inadvertently published material that is inaccurate about his person.

Ever since our publication, the barrister has been lurching from one emotional crisis to another, and he is patently not in control of his mind. It is rather intriguing how the man of law has the time and energy to process puerile adventures on Facebook and TV studios but has not the discipline and composure to produce an intelligible response to our investigative report on his duplicity and games. In failing to collect himself and present a coherent and factual statement countering what was written about him, Barrister Emmanuel Ashu has lived up to his reputation of being a man who lacks composure, integrity and is emotionally too erratic. He should either sit up or shut up!

By Isong Asu in London and Dr Patrick Ayuk in Johannesburg