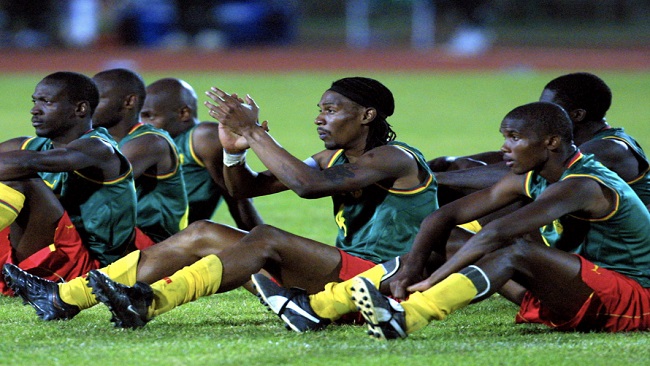 On This Day In 2002: FIFA Bans Cameroon’s Sleeveless Shirts 0

On a holiday last year, whilst I lay back on a sun lounger with a cold pint of Greek lager on the beautiful island of Kefalonia, from behind my sunglasses I spied an elderly (ish) man taking up residence on the opposite side of the swimming pool.

Nothing odd about that as the hotel I was staying in was clearly a popular place in the resort of Skala, particularly with British tourists.

However, it was what the chap, who I estimated to be around mid-60s, was wearing that made him stand out from the crowd.

He was sitting in none other than the infamous Cameroon sleeveless shirt that FIFA banned!

I had completely forgotten about it and while it may well still be popular attire on the streets of Yaoundé or Douala, it isn’t quite what I expected from yer da on his jollies in Greece.

I resisted the temptation to quiz the man on his allegiance to the Les Lions Indomptables (The Indomitable Lions) as he could well have been a knowledgeable man with a keen interest in African football, but something told me he was not.

It then got me thinking as to how old that shirt was (it was fading from the dark green I remembered and looked somewhat faded from the very probable explanation that it had accompanied the man in sunny climbs for years on end) and just why Cameroon were not able to wear it.

A quick scan of press cuttings revealed it is now 16 years old and at the time of the banning almost every single English media outlet rolled out the time old cliché – you can always expect something different from Cameroon – a stereotype thrust upon them since their incredible arrival on the world stage of football at the 1990 World Cup.

Some 12 years later it appears that was still following them around. In fact, more than a decade after Nery Pumpido’s feckless performance in the Argentina goal allowed François Omam-Biyik to score a memorable goal against the defending world champions, not to mention the wonderful sight of Claudio Caniggia’s boot flying up into the air following a magnificent lunge by Benjamin Massing (RIP), Cameroon were still subjected to this type of quote from FIFA’s Keith Cooper:

“You can always expect something different from Cameroon, not only in terms of their shirts.”

Puma’s sleeveless shirts were in fact not a new design when FIFA took the decision to outlaw them a few months before the 2002 World Cup, and had in fact been worn successfully by Cameroon throughout that year’s Africa Cup of Nations.

The new basketball style shirt proved to be a lucky omen as Cameroon beat Senegal on penalties to claim their fourth crown in front of 50,000 fans in the Malian capital Bamako.

Puma were forced to hastily redesign a kit with sleeves for the World Cup as Cameroon failed to progress from Group E, where despite getting four points, were beaten to the knockout stage by Germany and Mick McCarthy’s Ireland side.

The shirt then became the sleeveless one with two random black thin bits of fabric attached to replicate sleeves.

But FIFA know best and Keith Cooper – the man charged with banning the Cameroon shirt was promptly fired by that great man of football Sepp Blatter, some three months later.

Here is to an unforgettable shirt and may many a pensioner adorn it for years to come!