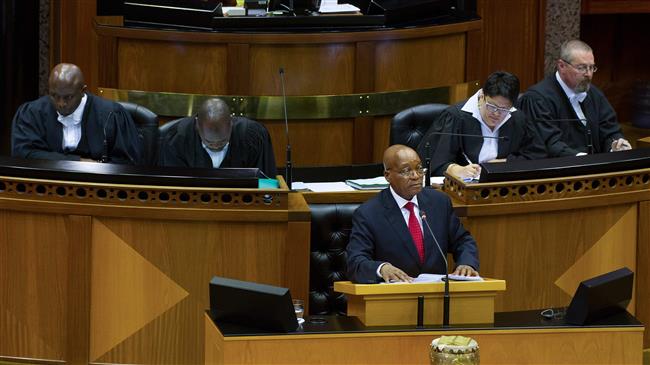 South Africa’s ruling party has postponed a top-level meeting that was expected to decide about scandal-hit President Jacob Zuma’s political future, as rumors emerge that it has reached a deal with Zuma to step down.

The African National Congress (ANC) had scheduled an urgent meeting of its national executives for Wednesday evening to discuss Zuma’s future but suddenly moved it to February 17.

Instead, it released a statement late on Tuesday, saying Zuma and ANC leader Cyril Ramaphosa had held “fruitful and constructive discussions” in Cape Town on Tuesday.

Zuma, whose tenure officially runs until mid-2019, has come under pressure to leave office over corruption allegations. He was replaced as leader of the ANC by Ramaphosa in December last year.

The party’s secretary general, Ace Magashule, said the meeting’s postponement, as well as the postponement of a state of the nation address that Zuma had been scheduled to deliver on Thursday, would give them a “further chance to talk.”

Ramaphosa will give details on Zuma’s fate later in the day, according to parliament speaker Baleka Mbete. “In this day, there will be some progress, which the president of the ANC will be ready to come back to us about,” Mbete said.

Meanwhile, South African website Times Live has quoted unnamed sources as saying that Zuma has agreed to quit if the certain terms can be negotiated for his departure.

Opposition parties are demanding that a vote of no-confidence be held to remove the president.

Zuma engineered the ouster of former president Thabo Mbeki in 2008 shortly after he was elected leader of the ANC.

The ruling party lost ground to opposition groups, the Democratic Alliance and the Economic Freedom Fighters, in the 2016 local elections. Many within the party now want the 75-year-old president to go as soon as possible so they can rebuild the party’s standing following the corruption allegations, which have provided political fodder for the opposition.

Zuma is accused of having links to the wealthy India-born Gupta family, who are alleged to have influenced his government. Zuma and the Guptas, however, deny the allegations.