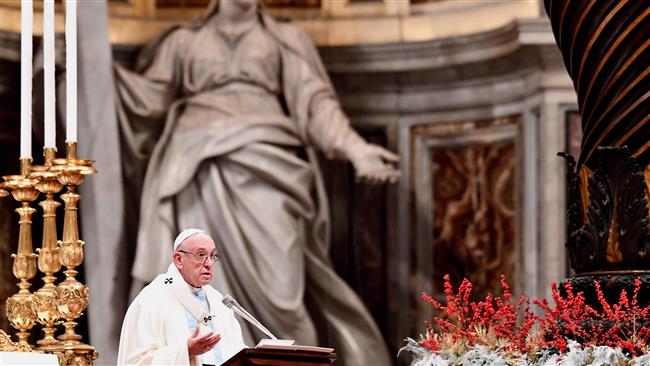 Pope says refugees’ hopes must not be dashed 0

Pope Francis has used his traditional New Year’s Day address to highlight the plight of refugees seekers, describing them as the world’s “weakest and most needy.”

In a Monday speech before an estimated 40,000 people who had converged at St. Peter’s Square at the Vatican, the Pope also said he had chosen the plight of migrants and refugees as the theme for the Church’s World Day of Peace, celebrated annually on January 1.

“For this peace, to which everyone has a right, many of them (the refugees) are willing to risk their lives in a journey, which is often long and dangerous; they are willing to face strain and suffering,” the pontiff said.

“It is important that there is a commitment from everyone, from civil institutions, and those in education, welfare and church organizations, to ensure a peaceful future for refugees, migrants, everyone,” he said. “Please, let us not extinguish the hope in their hearts, let us not suffocate their hopes for peace!”

In November last year, the pope had released a message in which he said the politicians who incited fear of migrants were sowing violence and racism. He acknowledged, however, that the intake of refugees could complicate existing problems in a country, while appealing for practical solutions for welcoming newcomers.

Pope’s remarks about the plight of refugees come as some have questioned his response to the exodus of widely-persecuted minority Muslims from Myanmar to Bangladesh. In a trip to Myanmar last November, the pontiff refused to refer to the minority Muslims by their community name, the Rohingya, because of concerns not to unsettle the Myanmarese government.

More than 620,000 Rohingya have fled state-sponsored violence in Myanmar to Bangladesh. 40,000 have also escaped from Southern Cameroons into Nigeria.

In Myanmar, the Pope made no explicit mention of the brutality, amid reports that he had been warned by advisers against mentioning the word “Rohingya” out of fear that it would turn the country’s military and government against minority Christians in Myanmar as well.

Over the past months, Myanmarese government troops and Buddhist mobs have been raping, killing, and arbitrarily arresting the Rohingya. They have also been carrying out mass arson attacks to destroy houses in predominantly-Rohingya villages in the west of the country.