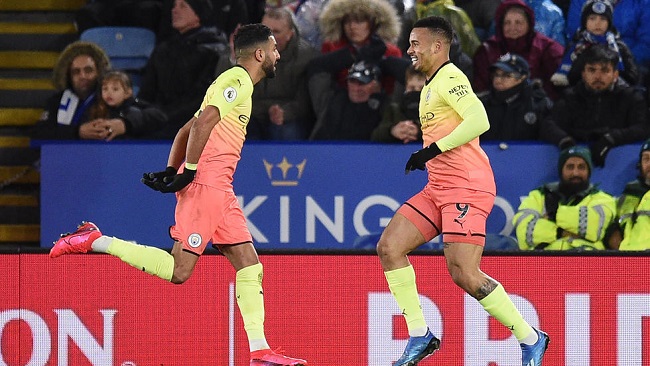 Gabriel Jesus struck to give Manchester City a 1-0 win at Leicester City on Saturday, strengthening their hold on second place behind champions-in-waiting Liverpool.

Pep Guardiola’s men have endured a turbulent week after they were banned from European club competitions for two years for breaches of financial fair play rules.

But a second-half winner from substitute Jesus after Sergio Aguero had failed to convert a penalty put them 17 points clear of fifth-placed Tottenham.

City, who still trail Liverpool by 19 points, bossed possession in a lively opening spell at the King Power Stadium but Leicester should have taken an early lead when Jamie Vardy was put through.

The pacy forward, who has not scored since December after an electric spell, was preparing to celebrate but saw the ball rebound agonisingly off the base of the post to safety.

A minute later, former Leicester favourite Riyad Mahrez went close, striking a left-footed shot from outside the box that was palmed away by Kasper Schmeichel.

Ilkay Gundogan had a chance after being played in by Aguero but he scuffed his shot from close range.

James Maddison tested Ederson with a free-kick in the 37th minute and minutes later played in Kelechi Iheanacho, who was floored in a collision with Ederson.

Aguero had the ball in the net on the stroke of half-time but the goal was ruled out for off-side.

Both sides maintained their intensity after the break and Schmeichel produced a fine save, diving down to his right, to save keep out a Kevin De Bruyne shot.

The decisive moment appeared to come just after the hour mark when Manchester City were awarded a penalty after a VAR check confirmed that Leicester’s Dennis Praet had handled the ball in the area.

Aguero blasted the ball down the middle but Schmeichel kept it out with his legs, moments later denying the Argentine hitman with his left foot.

Guardiola replaced Aguero with Jesus with less than a quarter of an hour to go and the change paid quick dividends as the Brazilian stretched to put the ball past the diving Schmeichel after an assist from Mahrez.

City, who could win their third consecutive League Cup next weekend when they face Aston Villa at Wembley, are appealing their UEFA ban at the Court of Arbitration for Sport.

Leicester, have won just one out of their past Premier League matches after a fine start to the season and will be glancing nervously over their shoulder at Chelsea, now just six points adrift after their 2-1 win over Tottenham.