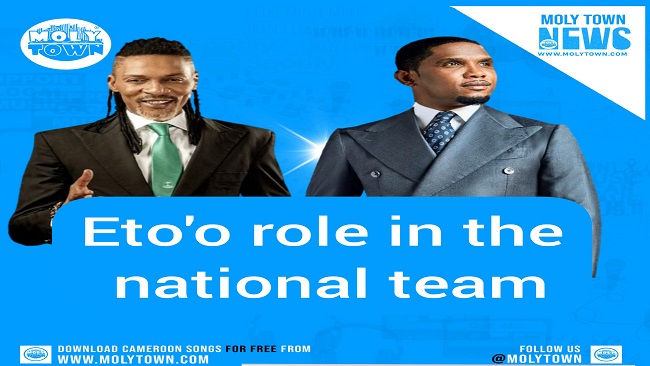 Qatar 2022: New details on how Eto’o and Song will fall from grace to grass 0

The Indomitable Lions of Cameroon will on 23 November 2022 enter the Al Janoub Stadium in Al-Wakrah, Qatar as beyond-overwhelming favorites to leave the FIFA World Cup tournament after the first round.

It’s remarkable to believe that the Lions are already looking disarray even before the competition kicks off in Qatar. Several poor performances during international friendlies and a miserable 1-1 draw with a non football nation like Jamaica is what is going to turn long-serving centre back Michael Ngadeu-Ngadjui’s dream for the Lions into a nightmare.

A number of factors are presently contributing to the Indomitable Lions poor performances. But the most salient is the team’s poor fit with head coach Rigobert Song and the president of the Cameroon Football Federation Samuel Eto’o.

Coach Rigobert Song does not like the team he is carrying to Qatar and he also does not like coaching big names like Clinton Njie and Nkoulou. Thanks to Eto’o, Song now has Nkoulou instead of Ngadeu.

The team has been struggling to come together as a group ever since Eto’o started introducing players from far away leagues and also players who were born and raised up in the West. Everyone in the squad is confused and they are all trying to cater to Coach Rigobert Song’s style which is completely different to what the all powerful President Samuel Eto’o wants!

Eto’o is always in the dressing room going after players even on social media and does not know how to keep his mouth shut. He often complains about players performance which is something never known in the rich history of Cameroon football.

Some of the players contacted by Cameroon Concord News after the Africa Cup of Nations in Yaoundé said Eto’o isn’t letting them play. “He’s trying to make us play for Eto’o and not for the nation! He’s not letting us play, we just need to play football and defend the colours of the country” one of the players hinted our correspondent.

Our Yaoundé city reporter who contributed to this report said FECAFOOT picked the wrong coach for the time. “Rigobert Song thinks he has a team full of stars like Mboma, Lauren, Kala and Wome and he has been trying to coach the team like it is Eto’o’s team. Telling guys who play their football all over Europe how to play what Eto’o wants! What they should and shouldn’t do on the pitch, instead of just trying to come together and win games and trophies” Rita Akana observed.

The appointment of Rigobert Song by Eto’o has also been interpreted by many football commentators as trying to use the Indomitable Lions as a tool. Truth be told, that’s probably why nice guys like Mamadou Idrissou are now speaking out and challenging the current status quo.

The problem is not just that these groups of Lions stars have not learned to be a cohesive unit — it’s that the leadership both technical and administrative is too young and foolish!

Eto’o’s decision to always enforce his own thoughts on the team appears to be making internal challenges more difficult. Rigobert Song is now being criticized for his handling of the Qatar 2022 selection process but video of the team announcement clearly reveals that he was simply presented the list of the 26 players to read to the media. To be sure — Song is not going to make anything work in Qatar.

Beyond leaving out one of the best defenders in Africa, the Song-Eto’o’s plan has gone against what the Indomitable Lions had all along represented in world football. The Indomitable Lions didn’t get its name by accident — from 1982 to Italia 90, the squad was constructed with men with solid personal football achievements. Song and Eto’o have misunderstood the Lions idea so thoroughly that after Qatar, both men shall fall from grace to grass.

The Indomitable Lions have always hard its key players that made Cameroon dominant as ever! But the team was always constructed with an eye towards national unity. With a Clinton Njie call including just one Anglophone in the FECAFOOT hierarchy, the Southern Cameroons perception of this 2022 team would have been different. So what changed in 2022? Perhaps, a move towards francophonising the francophone nation with a more inconsistent selection process.

However, it’s worth paying special attention to veteran footballer Mamadou Idrissou who recently said Nkoulou was called into the squad because his wife is a cousin to Samuel Eto’o.