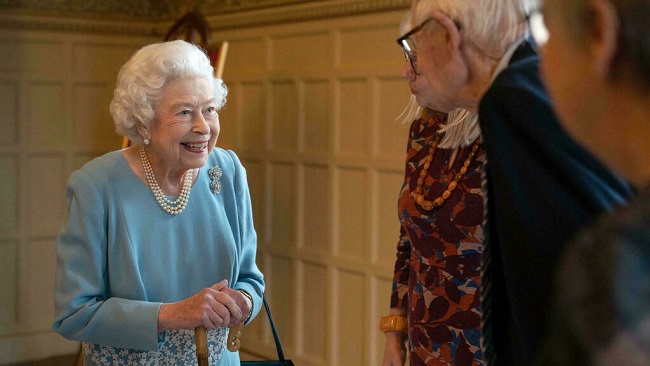 Queen Elizabeth II made a rare public appearance on Saturday, chatting and cutting cake at a party, a day before she enters her 70th year as monarch.

The 95-year-old Queen has rarely appeared in public and has cancelled major engagements since spending a night in hospital for tests last October.

Wearing a blue dress and pearls, the Queen talked to people from local community and volunteer groups at a morning reception at her Sandringham residence in Norfolk in eastern England.

She is about to mark a major milestone in her reign, as Sunday will be the 70th anniversary of the day her father, King George VI, died, and she became queen aged 25.

The nation will take part in Platinum Jubilee celebrations this summer including a four-day weekend.

On Saturday, the Queen cut a cake with the Jubilee emblem iced on top and received a posy of flowers at the reception in Sandringham’s Ballroom, which included a band playing the song “Congratulations”.

The guests included Angela Wood, a woman who helped create the recipe for coronation chicken, first served at a banquet in 1953.

Wood told the BBC in January that she helped fine-tune the recipe for the bright yellow dish of chicken, boned and coated in a curry cream sauce, while a 19-year-old student at a Cordon Bleu cookery school.

The Queen was also photographed out walking out at Sandringham. She has used a stick in public appearances since October, but royal officials said it was not linked to any specific health condition.

The Queen traditionally spends her Accession Day at Sandringham, where her father died of cancer while she was on a visit to Kenya.

She is set to become the first UK monarch to reign for 70 years.