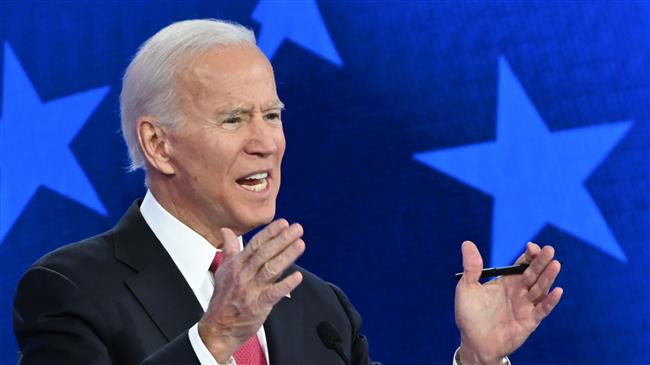 Race For the White House: Biden says ‘I’m running to restore the soul of America’ 0

Former US Vice President and leading 2020 Democratic presidential candidate Joe Biden says he is “running to restore the soul of America.”

In a statement issued on the seventh anniversary of the Sandy Hook shooting on Saturday, Biden said he will prioritize efforts to combat the rise of gun violence in the United States should he win the presidency.

“I said when I got into this race that I’m running to restore the soul of America,” he said in a statement. “Few things make the need for that more clear than school shootings – what kind of nation are we if we simply accept that kids learn active shooter drills with their ABCs?”

“I know that we can defeat the NRA,” he continued. “I’m the only candidate in the race who has done it before – twice, when I was in the Senate. As president I’ll do it again.”

Biden has proposed to repeal the federal law that protects gun manufacturers from civil liability claims, and ban on the manufacturing and sale of assault weapons and high-capacity magazines, and implementation of background checks for all gun sales.

He had called for a reinstatement of an assault weapons ban in the wake of two mass in August that killed 31 people.

The 1994 Federal Assault Weapons Ban bill was signed into law by former President Bill Clinton. It expired in September 2004. Since then an assault weapons ban hasn’t been in place in the US.

Biden claimed that along with Senator Diane Feinstein (D-Calif.) he got the bill passed in 1994, and said he “fought hard to extend” the ban in 2004, but failed to do so.

On Saturday, the former vice president claimed that gun control could be a galvanizing issue heading into the 2020 race.

“There’s a straight line from the brave parents of Newtown, many of whom have organized at the grassroots level and in the courts, to the activism of the Parkland students, to the millions of others who’ve said ‘enough’ in the long years between and since then,” he said, referring to other school shootings.

“This call for change is growing louder and louder, and is using every tool of our democracy, in the streets, voting booths, and courts,” he added.

Many have called for measures such as an assault weapon ban, universal background checks and other gun control reforms long stymied by partisan fighting in Washington.

Several 2020 Democratic presidential contenders have also said that they would use the executive powers of the presidency to pursue gun-control measures if Congress again fails to act.

Trump meanwhile has suggested that he could sway the nation’s powerful pro-gun lobby, the National Rifle Association (NRA), to drop its opposition to gun restrictions.

Firearms regulation advocates state that restricting and tracking gun access would result in safer communities, while gun rights advocates state that increased firearm ownership by citizens reduces crime and assert that criminals have always had easy access to firearms.

The firearms industry in the US is tempting children at very low ages to take up shooting by selling brightly colored guns.

On December 14, 2012, twenty children and six adults were fatally shot by Adam Lanza, the gunman who later killed himself at the Sandy Hook Elementary School in the town of Newtown in the US state of Connecticut.

Following the shooting, a task force funded by the NRA recommended more armed guards and teachers in schools. Now President Trump is voicing support for that recommendation.