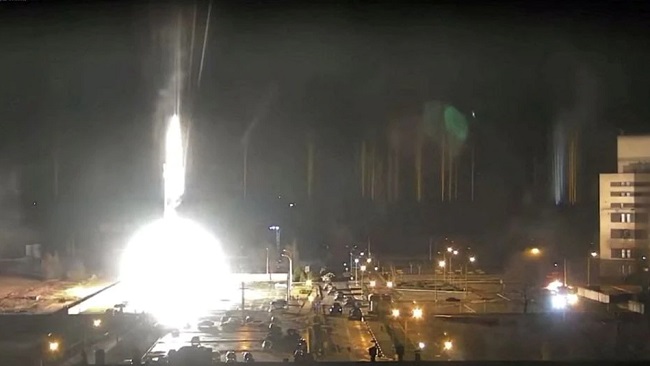 Ukrainian authorities say Russian forces seized the largest nuclear power plant in Europe Friday after a building at the complex was set ablaze during intense fighting.

Fears of a potential nuclear disaster at the Zaporizhzhia plant spread alarm across world capitals, before authorities said the fire in a building identified as a training center, had been extinguished.

Ukraine’s president accused Russia of resorting to “nuclear terror” and seeking to repeat the Chernobyl disaster after saying that Russian forces attacked a nuclear power plant.

Russia’s defense ministry, however, blamed the attack at the site on Ukrainian saboteurs, calling it a monstrous provocation.

Earlier, in a video message, President Volodymyr Zelensky urged world leaders to prevent Europe from “dying from a nuclear disaster”.

US Energy Secretary Jennifer Granholm said there was no indication of elevated radiation levels at the Zaporizhzhia plant, which provides more than a fifth of the total electricity generated in Ukraine.

Local officials also said that essential equipment at the station was unaffected and radiation levels were normal.

An official at the state enterprise that runs Ukraine’s four nuclear plants said there was no further fighting, the fire was out and Zaporizhzhia was operating normally.

“(Nuclear power plant) personnel are on their working places providing normal operation of the station.”

A video from the plant showed one building aflame, and a volley of incoming shells. The head of the International Atomic Energy Agency said Ukrainian authorities had assured the IAEA that “essential” equipment were unaffected.

Russia has already taken control of the Chernobyl plant, about 100 km north of Kiev, which has been one of the most radioactive locations on earth since it saw an explosion in its fourth reactor in April 1986.

Financial markets in Asia spiraled out of control as early reports of the incident emerged, with stocks falling and oil prices soaring further.

“Markets are worried about nuclear fallout. The risk is that there is a miscalculation or over-reaction and the war prolongs,” said Vasu Menon, executive director of investment strategy at OCBC Bank.