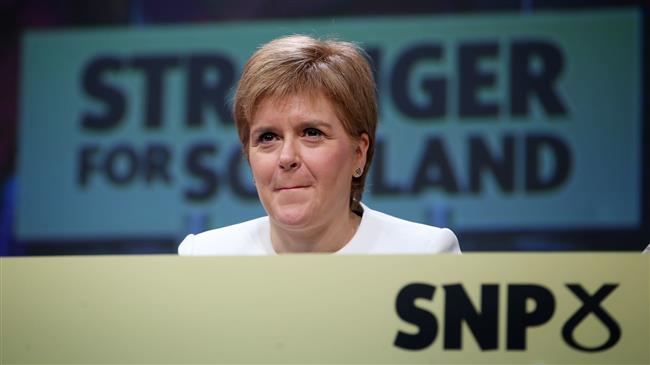 Scotland’s National Party (SNP) leader and First Minister Nicola Sturgeon has urged supporters to focus on expanding support for independence from the United Kingdom instead of the timing of the secession.

Addressing delegates at the SNP’s summer conference in Aberdeen on Saturday, Sturgeon – who also heads Scotland’s decentralized government – further acted to diminish expectations among her backers of an immediate push for a new independence vote while the outcome of Brexit remains unclear.

“The case for independence is strong. And it is getting stronger by the day,” Sturgeon said.

“As we wait for the fog of Brexit to clear, our opportunity – indeed, our responsibility – is this: Not just to focus on the ‘when’ of independence. But to use our energy and passion to persuade those who still ask ‘why?'”

“Right now, that is the more important task.”

The development came as polls indicate that a majority of Scots are against holding a fresh ballot. This is while a push for an early referendum in 2017 backfired when support for her party declined in a snap election.

In March 2017, Scotland’s parliament authorized Edinburgh to request a transfer of powers from the UK parliament to hold a referendum, though London has not yet agreed to the request.

This is while a SNP spokesman was cited in a Reuters support as saying that Sturgeon remains committed to updating the public on the timing of a possible new referendum on Scottish independence in the autumn.

Her speech on Saturday further highlighted a new SNP economic report that tackles the weaknesses of the economic arguments from the 2014 vote.

“It doesn’t pretend there are always easy answers – no one believes that. But it does lay strong foundations for independence. Even with no extra growth from independence, the deficit can be turned around in five to 10 years,” Sturgeon underlined.

She also emphasized on the need for more immigration to the sparsely populated northern tip of Britain and greater powers for Scotland to control it as a central feature of economic growth.

“It’s time for powers over migration to come to Scotland,” said the SNP leader.

Scotland’s population, much of which is rural and dispersed unlike the rest of Britain, is aging faster than other parts of the country.

Immigration, meanwhile, remains one of the trickiest political issues in the Brexit negotiations, and limiting the number of foreigners entering the UK was reportedly a key element on which Britain’s overall 2016 vote to leave the EU rested.