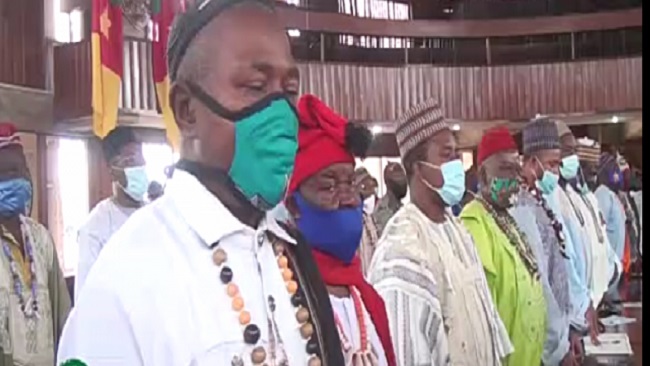 A group of prominent South West traditional rulers have thrown their weight behind the Ambazonia Restoration Force describing the Southern Cameroons Self Defense Group as the guarantor of true security, unity, and power in British Southern Cameroons.

In a secret memo reportedly addressed to the Vice President of the Ambazonia Interim Government and leaked to Cameroon Concord News Group, the South West Chiefs noted that the Biya regime in Yaoundé and its troops deployed to Southern Cameroons have lost control and were no longer in charge of anything.

The South West Chiefs including some notables who endorsed the said document, also pointed out that Biya is not the one at the head of affairs in Yaoundé. Correspondingly, the traditional leaders expressed their support for constructive self defense and observed that there was an urgent need for leaders of the two Cameroons to meet again and examine the bill of health of the 1961 union including the way forward.

The chiefs whose names we are withholding stated in the document to Vice President Yerima that all South West and North West traditional rulers residing in Douala and Yaoundé can no longer speak for the suffering people of Southern Cameroons.

The strongly worded document revealed that the 88-year-old President Biya and his gang of corrupt French Cameroun political elites do not want stability and peace be established in British Southern Cameroons.

The South West Chiefs urged Vice President Dabney Yerima to make it an absolute necessity the withdrawal of all Francophone army soldiers from Southern Cameroons according to a long-overdue position taken by the jailed Ambazonian leader President Sisiku Ayuk Tabe.

In their July 2 2021 letter, the South West Chiefs praised the special role played by the Southern Cameroons Interim in the four years of fight against an evil marginalization.

It is vital to include in this report that last week, General Nka Valere of the Cameroon government military said residents, elites, chiefs, and church leaders have embraced the separatist ideology in all areas, making it difficult for the Francophone army to fight.

The Ambazonia Restoration Force is a thorn in the side of La Republique du Cameroun’s military which is widely believed to be managing an array of militant groups, including Atanga Nji Boys to advance its French centric agenda in British Southern Cameroons.