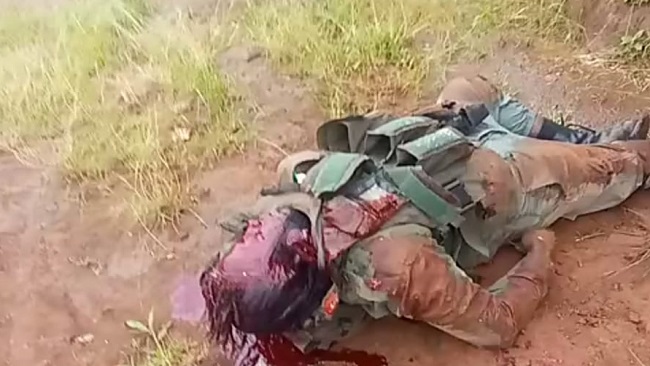 Southern Cameroons Crisis: If only they had listened! 0

Nobody in the Cameroonian army had ever thought that the country’s military would be humiliated by a hastily assembled ragtag group of fighters when the Southern Cameroons crisis started.

The government, its sycophants and spin doctors had clearly said that the mission to the two English-speaking regions of the country would be swift and without casualties on the military’s side.

The government had floated the idea that the country’s military efforts would be bolstered by the Israeli-trained Bridgade d’Intervention Rapide (BIR) known for its ruthlessness, inhumanity, and rank brutality. All this propaganda was intended to strike fear into the minds of ordinary Southern Cameroonian citizens who simply wanted their government to listen to them.

Of course, it did not take long for the country’s military to get to work. Whole villages were burned down, sometimes with the elderly in them; young, unarmed men and women were killed in the centers of most towns in Southern Cameroons; many fighters who only had hunting rifles, were brought down by the bullets of well-trained snippers; and civilians were caught in the middle of a situation they knew nothing about, with many running into the nearest jungles to spare themselves the pain and agony that their own government was inflicting on them.

The population’s cry was so loud. Even the deaf could hear. The killing and maiming of ordinary civilians were really disheartening. Material destruction was revolting, and the Southern Cameroonian Diaspora could not be indifferent to the desperation and wailing of its people and this resulted in massive fund-raising campaigns across the globe for the purchase of arms. This was indeed the game changer and it brought much pain and premature death to many young army soldiers.

The country’s government was not listening despite calls from many governments and organizations around the world for a negotiated and peaceful resolution of a conflict that should have never existed.

Within the country, many people had called on the government to listen to the people and address the core issues that were causing the pain in the two English-speaking regions of the country. Honorable Joseph Wirba, a Member of Parliament for Kumbo at the time, had addressed the Parliament, highlighting the shortcomings of the current system of governance.

Instead of taking him seriously, he was treated as an outcast and many death threats were sent to him just to intimidate him. He had informed the government that if prompt action was not taken, when the lid will go off the pressure pot, the country will never be the same again. His prophecy is gradually taking shape.

The European Union, excluding France, urged the government of Cameroon to take an objective and peaceful approach to the issue, but their efforts did not pay off, even when the American Administration and Canadian government had added their voices to that of the European Union. Mr. Biya had prioritized war over peace and he felt only a swift and brutal military action could restore the country’s broken peace.

Today, the story is different. The pain is excruciating. Some 47,000 Cameroonians – both soldiers and civilians – have lost their lives in a war that could have been avoided if the Biya government had carefully listened to the voices of wisdom and to the English-speaking minority to gain a better understanding of the issues.

On the contrary, the government clogged its ears with arrogance, only listening to a bunch of desperate political sycophants whose mastery of the art and science of flattery and lies-telling is second to none.

The political sycophants are milking the country dry. They want to perpetuate their stay in the corridors of power. They understand that only lies-telling can keep them where they are. They love the perks that come with power and they will stop at nothing when it comes to manufacturing a beautiful lie for the Head of State, who himself, is completely and unfortunately out of touch with his country’s political and economic realities.

The fighting is already in its fourth year. The hunting rifles have been replaced with more sophisticated killing machines. The once formidable BIR has been demystified and many of its members are biting the dust in the jungles of Southern Cameroons.

The last two months have been very challenging to the country’s military. It has lost many of its members, with their weapons falling into enemy hands. The use of Improvised Explosive Devices (IEDs) against the military has been very effective. Many soldiers have been killed, heavy equipment disabled, and thousands of soldiers demoralized.

Today, many soldiers are being killed like animals by Southern Cameroonian fighters who have adopted new and innovative strategies that are proving to be very effective. The military’s uniforms and protective gears are being used by these fighters, making it hard for government forces to make a difference between them and their enemies.

Last week, many soldiers were blown up in Otu in Manyu Division by Southern Cameroonian fighters and their protective gear and weapons fell into enemy hands. These weapons are being used today to kill more soldiers and maybe to harass ordinary civilians.

Yesterday in Bamali in the Northwest Region, officers of the Bridgade d’Intervention Rapide (BIR) were humiliated and killed in a disgraceful manner by determined Southern Cameroonian fighters who happily shared videos of their exploits with the world.

Cameroon has been caught in a spiral of self-destruction because of the arrogance of its leaders. In Cameroon, once you get appointed, it implies you are the most intelligent person and you immediately stop paying heed to wise counsel. Being a minister in Cameroon implies you are omniscient and omnipotent. You are, indeed, a repository of wisdom and nobody can advise you. This is a mentality of the past and this is what is breeding a real disaster in Cameroon.

Honorable Joseph Wirba and many others had advised them of the disaster ahead and they are now seeing it clearly. Many young soldiers are today leaving their lives in the artificial killing fields of Cameroon created by their own government.   When will the government swallow its pride and call for a genuine negotiation so that the blood that is flowing in the two English-speaking regions of the country can be stopped?

As it stands, the government will never win this war. It must look for a way to safe its face. If it really wants to keep Cameroon one and indivisible, then it must stop coming up with cosmetic solutions for a situation that requires that the bitter truth be told, and a new future designed for a country that has been blessed with everything.