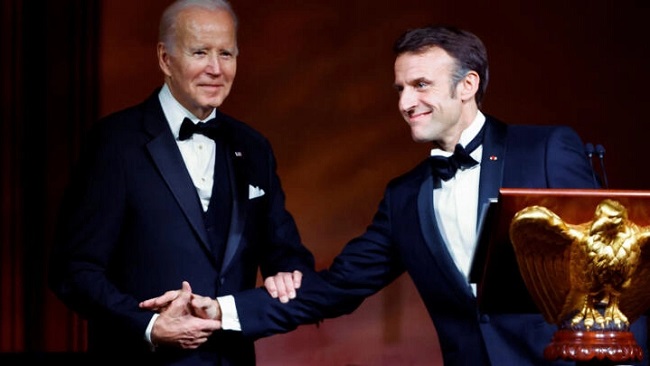 Southern Cameroons Crisis: Macron wins over the US government 0

The constant bickering between the various US-based factions involved in the war in Southern Cameroons has hurt efforts by the country’s English-speaking minority to gain its independence from the francophone majority which has ruled the country for decades.

The tension between the country’s English-speaking minority and the various governments which have ruled the country has always been there, but things finally came to a head in 2016 when the government’s crackdown on demonstrating English-speaking Cameroons led to calls for the total independence of the once British mandated territory.

The fighting has resulted in the economies of the two English-speaking regions being reduced to nothing, with more than a million English-speaking Cameroonians either fleeing to Nigeria or East Cameroon.

The last two years have really discredited the separatists who have being fighting over control. This uncalled for power struggle had gone a long way in destroying a struggle which had actually left the Cameroonian government in a quandary.

All efforts by the beleaguered government to wipe out the insurgents have all failed, but the separatists’ change of their objective from protecting the people to kidnapping the population for ransom has caused the population to turn against those the people once considered as liberators.

The fighting is now not against the government but against separatist fighters who have transformed themselves into violent kidnappers and rapists.

The population has decided to help the government to track down these unscrupulous elements who are notorious for their atrocities against their own people.

While the local population is living through a nightmare that has lasted some six years, the separatist leaders are enjoying life in many Western countries, with some of them purchasing masions at a time when the people on ground zero  are really struggling with life.

To destroy the insurgency forever, the Yaoundé government has called on the French government to take its plea to the Biden Administration and this strategy is delivering some appreciable results.

On the eve of Macron’s visit to Washington DC, the FBI visited some separatist leaders and their homes were thoroughly searched.

Chris Anu and Eric Tataw are in the cross hairs of the Biden Administration and the raids on their homes are just the beginning of a long process which has been designed to send them to jail for a long time.

The FBI does not always visit people, but when its agents show up on your property, then you must know that they have probable cause to lead you down the path of a long and tricky legal battle.

This week, three separatists living in the United States were sentenced to long jail terms for exporting arms to Cameroon and this is clearly against US laws.

They are also accused of sponsoring terrorism through illegal financial flows.

According to a State Department source, more Southern Cameroonians are being closely monitored and names like Ebini Christmas and Cho Ayaba are on the FBI long list of people wiring money to questionable beneficiaries in Southern Cameroons.

Macron is currently meeting with Biden in the American capital and he is very likely to raise the issue of Cameroonian separatists terrorizing their own people.

A Cameroon Concord News source in the US has said that there is panic among Cameroonians living in the US as they do not know if they are on the FBI radar.

No matter the outcome of the raids on the homes of Southern Cameroonians living in the United States, the fact is that the nasty rebellion in Southern Cameroons which has kept many children away from school for six years and robbed the population of its freedom, is gradually coming to an end.

As its leaders are being hunted abroad, some of their surrogates are already fleeing to Nigeria as they know their days are numbered.

The Cameroon government is now working with the population and anybody caught trying to kidnap or extort money from the population is immediately executed.

The young men taking advantage of the situation in Southern Cameroons to make money should understand that things have changed and the end is near, a source at the Unity Palace said.