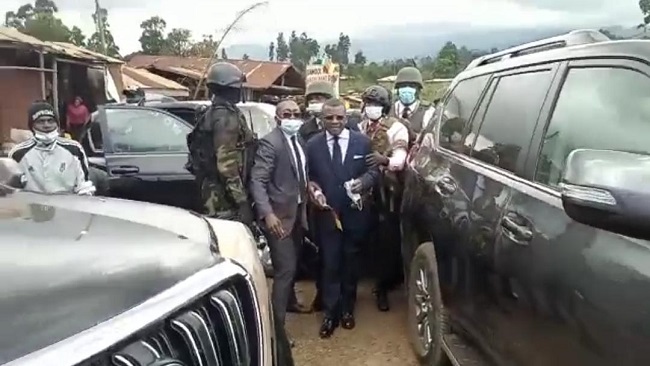 The Prime Minister, who was in the region to promote CPDM-made peace, was hauled away like a piece of luggage by his body guards when Southern Cameroonian Defense Forces came to arrest him for preaching heresy in a foreign country.

Though Joseph Dion Ngute hails from Southern Cameroons, he has been living in East Cameroon in exile where he is serving the East Cameroonian government as a Prime Minister Consultant.

It should be underscored that Joseph Dion Ngute is being looked for in Southern Cameroons and there is a death sentence hovering over his head like a Sword of Damocles for the multiple crimes he has committed against his own people, including treason and murder.

After two years as Cameroon’s Prime Minister, Dion Ngute has worked very hard to achieve one major thing – marrying a very young Beti woman who is carefully sedating him with sex and spying on him at will.

It should be recalled that Dion Ngute is a chief in his village, Ilouani, in Ndian Division but like most South West chiefs, he is seeking asylum in East Cameroon and he is among the thousands of internally displaced Southwesterners.