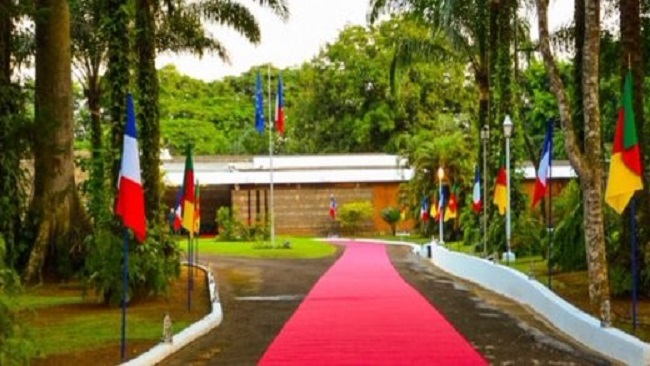 A bunch of hungry and remote-controlled Cameroonians are currently in front of the French embassy, thereby blocking roads and disrupting public order, just to express their frustration with the French president, Emmanuel Macron, who on Saturday told the plain truth that it was thanks to his pressure that Professor Maurice Kamto was released.

The French president also expressed his indignation with the Yaounde dictator who has resorted to killing his own people as a way of perpetuating himself in power.

The French president said he was aware of the Ngarbuh massacre, adding that he was totally aware of what was playing out in the two English-speaking regions of the country.

He indirectly confirmed the activist’s figures of 12,000 deaths due to the conflict that has pitted the moribund Yaounde government against its English-speaking minority.

The crowd in front of the French embassy comprises mostly unemployed Cameroonians hastily rushed to the venue of the demonstration by the higher education minister, Jacques Fame Ndongo, and defense minister, Joseph Beti Assomo, who are tribesmen of the dying 87-year-old Paul Biya who has made tribalism and nepotism the hallmarks of his corrupt regime.

After enormous pressure from the United States Administration which has threatened to directly intervene in Cameroon, the French government has decided to throw up Paul Biya who has become more of a lightning rod for controversy and an international embarrassment.

Meanwhile, as the pressure mounts on the government, officials of the regime have started using threats against staff of international organizations who simply want to do their job.

It has been reported that a UN official has fled  Cameroon after receiving threats from the country’s territorial administration minister, Paul Atanga Nji.

The UNOCHA representative in the Northwest region, Jack Andrew Pendleton, has fled Cameroon following threats from the crude and ruthless territorial administration minister.

Mr. Pendleton who left Cameroon yesterday night, had gone into hiding since last Thursday after he received a call from Paul Atanga Nji following comments he made to the media after his visit to Ngarbuh where over 30 women and children had been killed on February 14 by the country’s army.

After his visit to Ngarbuh, Mr. Pendleton and the UN team discovered that the number of deaths stated by the government was much higher. The findings were buttressed by testimonies from IDPs that the military was behind the heinous crimes.

The UN official with over 37 years of experience in humanitarian affairs was not impressed by the situation and spoke out his mind to the local press after the visit to the scene of the crime.

This eventually led to the government of Cameroon going after him. He received threats from the governor of the Northwest region, Adolphe Lele L’Afrique, and the territorial administration boss, Paul Atanga Nji.

Security operatives were also sent to his residence on many occasions, thereby violating his diplomatic immunity.

This led to his decision to escape before the country’s secret service could lay hands on him. But before his escape last night, he brieved the United States ambassador to Cameroon on the situation last Friday.

More on this story will be yours as we get more details.

By Francis Ashu in Yaounde