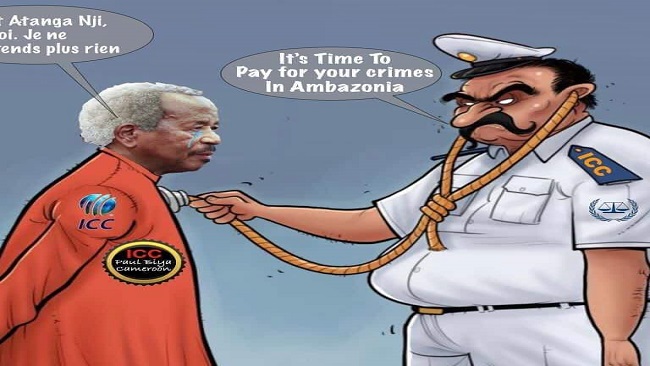 Southern Cameroons Crisis: The regional election is a non-event 0

From time immemorial, elections are designed to bring about change in a country or to pacify a population or an opposition that has been calling for change, but in Cameroon, elections have remained a tool of dominance by the ruling party, the Cameroon People’s Democratic Movement (CPDM) also known as the crime syndicate made in the same mold as the Sicilian Mafia.

For many decades, the CPDM has won every election in Cameroon not through the ballot boxes but through massive fraud orchestrated well before the polling day.

The party writes the election rules, it is a participant in the game and it serves as the jury and judge after the exercise. The country’s election commission is replete with ruling party officials and the constitutional council that is supposed to mediate in the event of any foul play has been a tool in the hands of the ruling party designed to ensure that members of the ruling party emerge victorious.

In the event of any post-electoral contests or demonstrations, the government releases the military like bees on the protesters which sometimes results in the killing of hundreds and maiming of thousands of Cameroonians.

After the 2018 presidential election, the opposition party leader who clearly won the election, Professor Maurice Kamto, has been the subject of government harassment. He has either been hauled to jail, threatened with death or put on house arrest for long periods of time.

The country’s hastily written anti-terrorism law of 2014, is the legal instrument the dictatorial Yaounde regime has been using to frustrate or jail its opponents.

Since the last presidential election, the country has been in the grip of an unrelenting political crisis that is threatening to strangulate the economy and bring down a regime that is clearly on its last leg.

Many analysts have been hoping that the imbecile, corrupt, decaying and inefficient government in the country’s capital will see the writing on the wall and on the basis of that, will make some concessions and rewrite a constitution that clearly belongs to the ash heap of history.

Strangely, the ruling party has continued with its unpalatable comedy of errors and arrogance that has already resulted in many preventable deaths, especially in the country’s two English-speaking regions where an active insurgency has put the country in the spotlight for all the wrong reasons.

The regional elections held in the country on Sunday, December 7, 2020, have simply underscored that the government is unrepentant and unwilling to mend its ways so that peace, stability and economic prosperity can return to a country that was once touted as an oasis of peace in a desert of political chaos due to the many civil wars that have dogged its neighbors over the last four decades.

Sunday’s elections, falsely dubbed as regional elections, were won even before they took place. The elections do not require the participation of the entire population. Only municipal councilors are required to vote and 95% of the councils are held by the ruling party because opposition parties had boycotted municipal elections on the grounds that the rules were flawed and designed to favor the ruling crime syndicate that has been in power for four decades with no real results to show for its existence.

In the country’s two English-speaking regions, the elections were viewed as a non-event. The country’s English-speaking Diaspora, in collaboration with the USA-based Interim Government, had called for ghost towns in a bit to foil the government’s outlandish and diabolic plan.

The entire Southern Cameroons has been like a real ghost town over the last three days with the population staying at home.

In many towns, even the ruling party councilors were scared of stepping out to vote as separatist fighters are still making the laws in that part of the country.

Separatists, who have been battling the Yaoundé government for almost four years, had issued a stern warning to any councilors who would dare to vote against the will of the people. In their view, no such elections should take place in the region.

In Southern Cameroons, the ruling CPDM has been outlawed and anybody seen militating for the ruling party is considered an enabler and must be dealt with according to the rules of the USA- based Interim Government headed by interim president Dabney Yerima who is sitting in for President Julius Ayuk Tabe who has been in the dirty dungeons of East Cameroon for almost three years following an illegal kidnapping jointly organized by Cameroon and Nigeria.

In the weeks leading to the elections, separatists had clearly informed the population and government officials that the death penalty decreed three years ago in Washington DC was still standing and this was rapidly followed by the killing of three army soldiers in Ndian Division, whence hails the country’s ineffective and emasculated Prime Minister, Dion Ngute.

Similarly, the separatists also informed the Cameroon Concord News Group via a voice note that more killings had been scheduled, adding that they were keeping their eyes on traditional rulers and municipal councilors who are having political intercourse with the corrupt CPDM.

According to the separatists, it has been alleged that some hungry Southern Cameroonians are in cahoots with the corrupt regime to bring down the revolution. The separatists have vowed to take out any person or persons who have been identified as promoting the government’s campaign of corruption and marginalization.

Top on the list provided to the Cameroon Concord News Group are: former Prime Minister, Peter Mafany Musonge; Senate Vice-President, George Tabetando; Prime Minister Dion Ngute; former Prime Minister Yang Philemon; the ever rambling and hungry former minister of the environment, Elvis Ngole Ngole; the inefficient and corrupt primary education minister, Nalova Lyonga Egbe; and all the senators and members of parliament from Southern Cameroons, most of whom are currently in exile in Yaoundé.

The separatists have vowed that theirs will be the kingdom of death and they will stop at nothing to enforce the law.

The separatists have also urged all the chiefs and fons who have fled the two English-speaking regions of the country not to return, as they are wanted dead or alive.

They are charged with enabling the enemy and the punishment in Southern Cameroons for such an offense is the death penalty. There is no commutation of such penalties in the newly minted “country.”

Sunday’s elections have only made things worse for Southern Cameroonian politicians in particular and the country in general. As the government doubles down on its approach to governance, so too are the separatists who have vowed to cleanse the region of any blacklegs who have sold their souls to the devil.

The separatists are more angered by the new ruling party’s approach where Paul Biya, the corrupt head of state’s pictures is being posted all over the place.

The 87-year-old and ailing Biya is bedridden and with the Coronavirus spreading like wildfire in Western countries, the government cannot fly him out of the country.

The separatists say that they will not tolerate the government’s “photocracy”, a system of governance where is a dying man’s picture keeps on representing him in events.

While Sunday’s elections have ended, Cameroonians are very sure that the political crisis will continue to hurt the economy and blight their lives.

Biya’s greed and inefficiency have brought untold hardship and death to Cameroonians.

His politics and policies are hurting the country and with his departure imminent, it is obvious that the country is heading to a post-Biya disaster which can only be preempted by the international community.

By Soter Tarh Agbaw-Ebai in Mulheim an der Ruhr