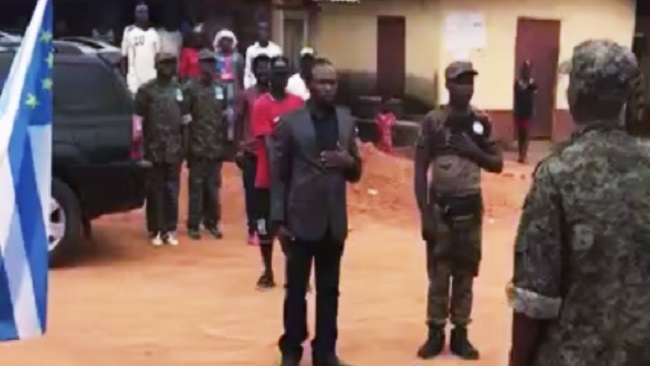 A very important history making event took place last weekend, Saturday March 10. A group of Ambazonian self-defense leaders for the first time under the auspices of the Interim Government came together and agreed to work collaboratively under the direction of the IG.

The meeting took place in the USA, and witnessed in attendance, leaders of all the self-defense groups in ground zero except those of Cho Ayaba and Ebenezar Akwanga who deliberately rejected invitation to be part of the come together. The self-defense groups left the three day conclave agreeing to work as a team to combat what they all agreed is the invasion of Ambazonia by La Republique du Cameroun’s army.

“Today, I can report to the people of British Southern Cameroons (Ambazonia) and to the world the creation of Ambazonia Self-Defense Council (ASC).” Read a statement that was issued only today, March 17, by Acting IG President, Dr. Samuel Sako.

The President noted that “The Ambazonia Self-Defense Council is the legitimate defense wing of the aspirations of the people of Ambazonia.” Adding that the initiative is a milestone achievement following months of consultations and a defense-focused meeting involving over a dozen top brass of the different Self-Defense groups within the territory of Southern Cameroons.

The establishment of the ASC Dr. Sako said, is a response to the call from Ambazonians for all defense bodies to collaborate and provide Self-Defense for our people, property and territory in a manner that is professional and consistent with international law.

In the two-day meeting of the Council, defense leaders discussed the state of play concerning the common security policy, defense initiatives, and political vision. They adopted conclusions on the council structure, its goals and follow-up actions. The Council brings together leaders of defense bodies under an independent defense platform and the Council collaborates with the Interim Government in a tight-knit model to implement one vision – complete independence of the Southern Cameroons.

The Ambazonia Self-Defense Council is made up of different branches: Executive Committee, Council Members, and Defense Bodies. The Council Executive Committee is responsible for top level leadership and management of our self-defense by owning the operating model of defense and managing risks, agreeing on plans for delivery of defense objectives, ensuring coherence, and leading transformation. The Executive Committee is composed of a chair, liaison officer and spokespersons who are all accountable to council members. The Chairman of the Defense Council is the principal defense adviser to the Interim President; however, all Council members are legitimate advisers, and they may respond to a request or voluntarily submit, through the Chairman, advice or opinions to the President. The spokesperson is the public relations face of the defense council. The liaison officer is responsible for coordinating multi-agency responses and resources.

Conspicuously absent from the two-day come together, where the leaders of ADF and SOCADEF led by Cho Ayaba and Dr. Ebenezer Akwanga respectively. Information from the IG says Dr. Samuel Sako prior to the meeting, held a closed door meeting with Dr. Akwanga for over two hours in which he tried persuading Akwanga to join the initiative but he turned it down. Dr. Sako held a similar meeting with Cho Ayaba by phone, but Ayaba too would not agree on joining the collaborative platform.

As things stand, it appears like Ayaba and Akwanga are out setting the stage for a Southern Sudan in the struggle for Ambazonia. Dr. Akwanga is quoted as telling Dr. Sako that, for him to join the collaborative platform for self-defense, they would have to return to the 4th Conclave for a start. Cho Ayaba is on record on several occasions as saying that he doesn’t recognize the IG nor Sako, the Acting President.

Ever since, Ayaba has personally engaged in a sabotage crusade against the IG using the social media, particularly Facebook where he disguises with fake names like Nyamfuka Kulubang, Ashu Tambe among others to spill insults and attacks against anything Interim Government. In most of the posts in which Ayaba posts using the Nyamfuka ghost name, he promises killing top members of the IG before they get to Buea. It is left to be seen, what a coalition of Ayaba and Ebenezer’s forces will achieve Vis a Vis the larger platform of the IG.