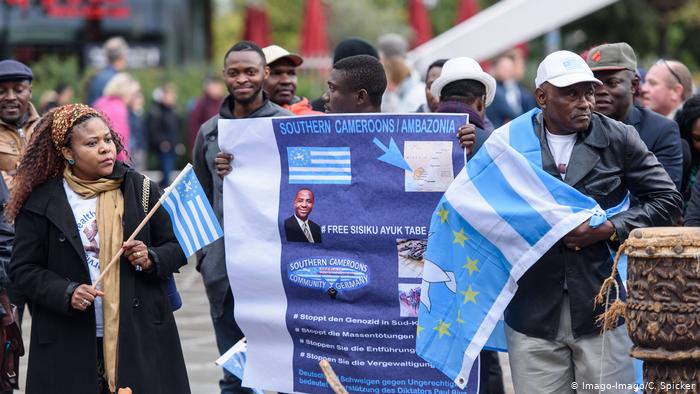 Cameroon’s English-speaking MPs have reacted angrily to the new bill, that if signed could grant a ‘special status to Cameroon’s two crisis-hit Anglophone regions, which was passed by lawmakers of the lower house on Wednesday. The bill is an attempt to resolve a three-year conflict in the English-speaking regions that has left at least 3,000 people dead and around 600,000 people displaced, according to  the International Crisis Group estimates.

If the Senate approves the devolution law and it comes into force, Cameroon’s Anglophone Northwest and Southwest Regions, where separatists are fighting government troops , will be able to develop their own education and justice policies. Decades of resentment at perceived discrimination against a fifth of the population in an overwhelming French-speaking country have boiled over into an armed campaign for independence that has been met with a brutal crackdown in 2017.

The bill contemplates the creation of assemblies of chiefs, regional assemblies, and councils, with each of the two regions having elected presidents, vice presidents, secretaries, and public affairs management controllers. Three commissioners will be responsible for “economic, health, social, educational, sports, and cultural development affairs”. Additionally, independent public conciliators will be put in place to solve disputes over the functioning of regional administrations. The bill also proposes more powers for elected mayors to recruit hospital staff and teachers.

However, all of this is not enough, says Dr. Nick Ngwanyam, a politician who grew up in the Anglophone region. “When we were told that we would have a special status, everybody was confused. It was something we were not really looking at. In terms of terminology, we had to find out what it meant. It was like an empty container and everybody was waiting for the meaning to fill it. And when that meaning came, I for one realized it would not solve our problems.”

“It is too little, coming too late”, says Senator Henry Kemende. It says in Section 328: In addition to the powers devolved on regions by the proposed law, the North-West and South-West Regions may exercise the following powers: Participating in the formulation of national public policies relating to the Anglophone education sub-subsystem. This is like a piece of sugar in a basin of water, their participation will not be felt. What we would have expected is to empower the regions to determine policies over the educational, judicial, legislative and executive system, to determine issues at a national level, and not just a local level”, Kemende emphasizes.

The power to address issues that directly affect their daily lives is what Anglophone’s have been yearning for in Cameroon’s Northwest and Southwest regions, Kemende told DW in an Interview. “They are the people who want to be in control of their own destiny, without guidance from somewhere else with foreign mindsets that don’t suit their local realities.”

After all, the idea of special status is nothing new, says the senator. “It is no novelty before we joined then La Republique Cameroun, Cameroon had a central government that gave the Anglophone regions a special status and a state, but they consulted the people. This time now, they are going back to the special status that they have enjoyed before, but why did they not consult the people concerned?”

Some MPs from the ruling party expressed their anger as they could not make recommendations or make amends to the bill. Questor Cyprian Awudu Mbaya, asked the minister of decentralization in parliament, “why didn’t you just take the text and the president would have just signed a decree? We cannot change even a comma because you will defend it.”

According to 63-year-old Ngwanyam, the government has not taken the tools necessary to bring a long-lasting solution on the table. “If you have a piece of meat and you want to cut it, you use a knife. A knife has a sharp and a blunt end, and using the blunt one would take a lot of time. Why don’t we use the tools that work?”

The fear of federation

The sharp end of the knife – this is what Ngwanyam calls his idea of a federation for the Anglophone regions of the country. He had suggested this solution in September, with the aim of breaking down the country in East and West Cameroon. “The special status was written with the spirit of assimilation, an agenda that Paul Biya has been running on for the last 36 years.” He does not understand why the government fears a federation system of governance. “They should explain it. Then we can begin to find out why a special status would do the trick.”

In October, President Paul Biya’s organized amajor national dialogueto discuss the anglophone crisis, but the main separatist movements boycotted the forum. One of the key recommendations of the talks was more autonomy for the English-speaking regions, which have so far failed to bring peace and had been criticized for lack of legislative follow-up. The United States has since backed the prospect of devolved power in the troubled regions, saying that the government’s military response was only strengthening separatists.