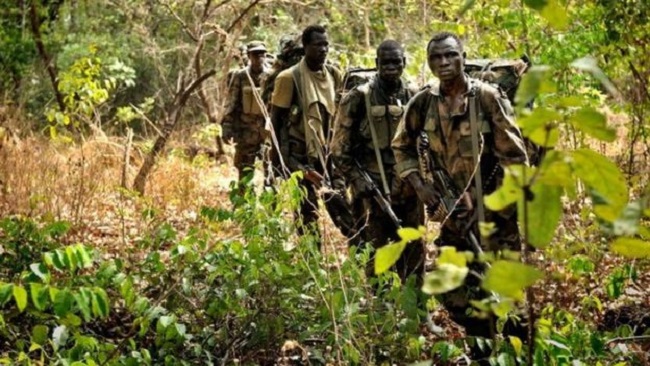 At least 50,000 villagers settled in the farming localities of Ikata, Bafia and Munyenge in Muyuka Sub-division, Fako Division of the Southwest Region have put themselves out of sight in cocoa farms, following a renewed military onslaught against separatists.

The campaign which gained public notice since Saturday, April 28, and remains on course triggered the settlers to escape into the farms for fear of the unknown. Such massive escape comes as the military has since been engaged in cross fire with gunmen suspected to be fighters of the illusionary State of Ambazonia.

Around midnight on Saturday, April 28, news of an impending Ambazonia showdown with the security forces induced the first moves. Families left their homes in the dark and headed for the bushes. The escapees comprised pregnant women, elderly, children and the sick.

At dawn, the villages were empty with human activity nonexistent. Every family had taken cover in the forest. On Sunday April 29, a military contingent which visited the Munyenge zone is said to have returned towards the Muyuka direction. News of these developments caused hundreds of people to start returning home. Life was fast returning to normal in the evening hours of Sunday.

A victim whose identity we are withholding for professional reasons told The Post that, as they crossed to find out the whereabouts a of a neighbour, news came that, another cross fire between the separatists and the military was forthcoming. Fear ripped through the villages and the few families which had returned home escaped back into the forest.

The escape into the bushes dealt a severe blow to church services across the affected villages. Mainstream and Pentecostal churches known to enjoy a huge following within this axis were empty on Sunday. A victim told The Post that even Pastors were spotted running into hiding as the atmosphere of gloom deflated hope from every being around the villages concerned.

In the escape frenzy, medical personal of both private and public health centres found within the affected villages are reported to have ordered patience to leave their respective facilities. The order came as the doctors and nurses were set to escape into the forest. Some patients are said to have developed strength on the spur of a moment to escape from the health centres. Such was the case in Bafia Muyuka, The Post was told.

At the moment, reports of houses razed to ashes have emerged in the localities of Munyenge and Bafia Muyuka. In Bafia for instance, even the Palace of Chief Peter Mbua is said to be in ruins. At Munyenge, a health centre is feared to be among the brunt houses. No group has claimed responsibility for such acts.

The Post gathered that after Saturday’s military visit, fresh clashes in Munyenge prompted the return of the security forces. Before the forces could drive to the localities, gunmen reportedly felled huge trees on the road and used stones to equally block the road.

Life In The Bush

In the last few days, families remain clustered in groups across the vast cocoa plantations that supports livelihood in these villages. Some families escaped with food items such as rice and other household items. They are known to be mostly spending the night around cocoa ovens for the fear of rains. Some families have migrated into Meme Division. During the day, farmers go about their normal activities in the farm. In the evening, the villagers share ideas over palm wine before falling asleep.

Despite the horror of crossing swamps and rivers, groups of young men are said to be making fast cash through the sale of pepper soup pork and goat meat. The guys are said to be feasting on the domestic animals which villagers left behind in the course of escape.

After preparing the meat, victims said, the vendors move from one corner of the forest to another to sell the meat. Water Shortage At the moment, thousands of those who sought refuge in farms towards the mountain are feared to be in dire need of potable water. This part of the villages is rocky without any trace of streams like the portions sharing boundary with Meme Division. Fears are rife that such families could be exposed to water born diseases from rain water.

While some families are known to have trekked towards Malende and boarded vehicles into safety, it is known to have come at a cost. A family The Post interviewed said they paid FCFA 3000 each to get to a junction at Malende- Muyuka leading to Muyuka. Bikers have since flooded the escape axis reaping thousands in the process as they transport the villagers.

Analysts hold that the separatists might have shift fighting ground from Meme with a target to infiltrate Fako Division. For one thing, forest tracks are known to exist between the villages of Bafia, Ikata and Munyenge towards Buea. The same source holds for a road passing through Munyenge to Kumba. Thus the military battle is said to be important to safeguard the disruption of public peace towards the Regional Headquarters of Buea.

The affected villages constitute one of the best cocoa producing basins in Cameroon. It is known to enjoy a beer consumption rate of FCFA 60 million per week during the peak of the cocoa season. These communities host cosmopolitan populations. The same localities hosts dozens of public and private schools from nursery to High Schools which have gone comatose since the crisis began. A gang almost took the localities hostage in 2017, but the military intervened and brought order. The leader of the gang was arrested and ferried to Yaounde. The same villages emptied into the streets in the early days of the Anglophone Crisis.