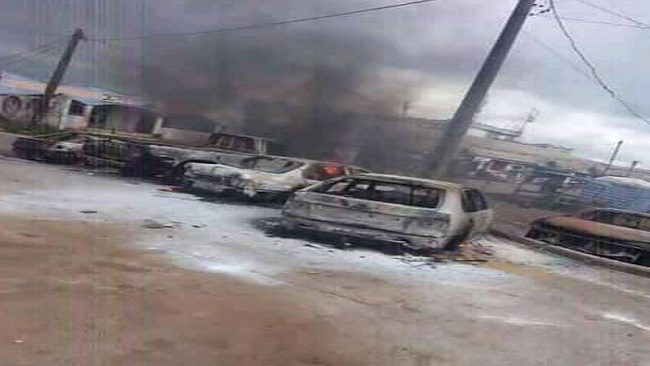 Fighting between Francophone Beti Ewondo troops loyal to the Biya regime in Yaoundé and Ambazonia Restoration Forces has continued today in Fako County with heavy artillery fire focusing on the strategically important towns of Muyuka, Muea and Ikata. Muyuka which sits on the only major road that links Buea the historic capital of Southern Cameroons to Meme, Ndian, Lebialem, Kupe Muanenguba and Manyu has seen fierce exchange in recent days as the Francophone Cameroon government forces attempt to gain control of the road.

The developments come as the conflict now in its fourth year is showing no signs of ending. The War in Southern Cameroons has already claimed at least 40 000 lives, almost all of them civilian children, men and women, murdered by Cameroon government troops in a series of targeted killings, organized massacres, and killings by fire in over 400 villages burnt down to ashes. Over half a million people have been forcibly displaced as refugees living in various countries and especially in refugee camps in Nigeria. Over another half a million people have become IDPs hiding in forests, caves and hills due to forced displacement. Additionally, over 1.5 million people are facing a humanitarian disaster.  The Biya French Cameroun regime is yet to release casualty statistics for its armed forces, although military officials have reported that some 3000 Cameroon government army soldiers have died and hundreds more have been injured.

Further clashes in and around Buea are highly likely over the near term. Fighting along the main road linking Mamfe to Ekok and Bamenda to Wum cannot be ruled out in the coming days. A heightened Cameroon government security presence and disruptions to transportation have rocked the entire Southern Cameroons territory.

The latest round of hostilities erupted today when Ambazonia Restoration Forces reportedly carried out strikes on settlements in Muyuka and Muea including Ikata following attacks by Cameroon government troops. Ambazonia Restoration Forces launched what it claimed to be a ‘counter-offensive’ in response. Cameroon Intelligence Report understands that both Amba fighters and Cameroon government forces made extensive use of heavy weapons during the clashes, including artillery and loitering munitions.

The plebiscite was imposed in the teeth of opposition by the leadership of the trust territory. It offered a Hobson’s choice of ‘joining’ either Nigeria or French Cameroun. The internationally-prescribed political status option of sovereign independence was deliberately excluded. There was no good reason for doing so. On 11 February 1961, a skewed plebiscite was foisted on the people of the Southern Cameroons. Faced with the Hobson’s ‘choice’ that was forced down their throat, the people opted for independence in political association with Republique du Cameroun. It was agreed in writing between the two countries and to the knowledge of Britain and the UN, that the political association would take the form of an aggregative federation of two states, equal in status.

Western governments generally advise their citizens against all travel to areas of conflict but have maintained a kind of deliberate silence ever since the crisis in Southern Cameroons started four years ago.