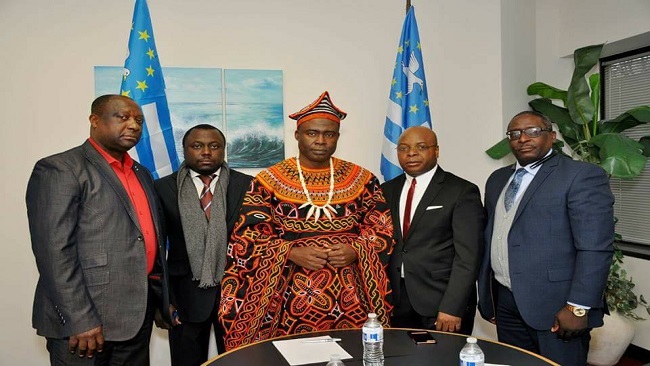 Cameroon Concord News Group holds the strong opinion that the government of the Southern Cameroons/Ambazonia will not be determined by ego/power-seeking profiteers, opportunists, activists and clueless self-seekers but by the sovereign people of Ambazonia. Cameroon Concord News Group on the outstanding trust and fact-based record of the IG urges Ambazonians from all walks of life to redouble their support for the Interim Government of the Federal Republic of Ambazonia.

The unfolding results of the discreet and matured diplomatic efforts deployed by the Interim Government and Ambazonians of goodwill towards finding an international solution to our cause merits unmitigated support.  Finally, the Southern Cameroons/Ambazonia problem has found its way to the United Nations Security Council and the AU Peace and Security Commission. It has pricked the conscience of the world, which is responding through the US Congress, the US State Department, the UN, the UK House of Commons and the House of Lords, several organizations and countries that are alarmed at having to deal with the consequences of another genocide on their watch.

It is not long since the Secretary for Communication; the Hon Chris Anu strongly condemned the inaction of the UN, the AU and the International Community towards the genocide of our people. No reasonable people facing a genocide would have acted no less.   He was right. There are obvious indicators from the recent UNSC debate that our voices might have been heard at long last. What is required of all Ambazonians is not to squander these opportunities.  Ambazonians need to support the IG and ground zero operations.   Power seeking individuals and social media activists will not fulfill our diplomatic or self-defense needs.  Their egos have been standing between them and the peoples’ liberation agenda for long. That needs to be deconstructed now.

Cameroon Concord News Group calls on Ambazonians of all walks of life to support the IG which is the collective voice of the people to call for a strong response to the genocide and international crimes committed against the people.  It is the collective resolve of the people of Ambazonia speaking through the matured, professional and well tested voice of the IG that will move the world to hold the perpetrators of these crimes to account. This is the time to slay the beast of impunity and international criminality in Ambazonia, now that the world diplomatic community has been trickled and is fully alert.   It is also a time to strongly support the Ambazonia self-defense ground zero operations. The exigences of a sustained strong diplomatic and self-defense actions warrants strong support because more positive outcomes depend of this support.

Cameroon Concord News Group recalls that on September 22, 2017, the people of the Southern Cameroons/Ambazonia of all walks of life, overwhelmingly endorsed the Interim Government of the Federal Republic of Ambazonia under the leadership of His Excellency President Sisiku Julius Ayuk Tabe with an urgent mandate to proclaim and defend the restoration of the independence of the Federal Republic of Ambazonia.  His Excellency Sisiku Julius Ayuk Tabe fulfilled the peoples’ will fully to the peoples’ satisfaction. This is one reason, why a great majority of Ambazonians are united and committed to defend the restored independence of the Southern Cameroons/Ambazonia and the Interim Government they endorsed and mandated to proclaim the restoration on their behalf and with their full participation. This is not the time for Ambazonians to squander this opportunity through the distractive adventures of power seekers to distract the Interim Government from pursuing the peoples’ mandate.

All households,local government areas or counties in Ambazonia are enduring the genocide, crimes against humanity and war crimes committed by terrorist forces of French Cameroun deployed by the arch-terrorist Paul Biya.  This is an impetus for Ambazonians of goodwill should support the ongoing diplomatic and operational efforts by the stable, respectable, humble, reassuring, focused and level-headed IG of Ambazonia.  The IG has demonstrated an ability to recognize the fact that there are many Ambazonians world-wide with the required professional, academic, diplomatic, expert, discrete skills and attributes who are eager to contribute in the defense of the Ambazonia homeland.  Based on this attribute, Cameroon Concord News Group is pleased that the IG has demonstrated its trustworthy ability and the humility in working with many Ambazonia professionals and experts in different fields of life in seeking accountability for the crimes of the terrorist government of French Cameroun.

The humility, simplicity, level-headedness of Acting Interim President Samuel Sako and members of the IG are attributes of strength and not of weakness as some self-opiniated activists have openly stated.  These are the qualities that endeared the President of the Interim Government of the Federal Republic of Ambazonia His Excellency Sisiku Julius Ayuk Tabe to an overwhelming majority of Ambazonians of all walks of life.   Ever since his abduction with members of the Interim Government, his leadership continues to inspire the Acting Interim President His Excellency Samuel Sako and members of the Interim Government. Acting President Ikome Sako and His Excellency Ayuk Tabe are united by their humility, their loyalty to the homeland, their level-headedness, their ability to garner the trust and support of Ambazonians of all walks of life with ease and with utmost trust and confidence.

Many Ambazonians working in sensitive positions that Cameroon Concord News Group spoke to for this editorial, expressed the respect for the confidentiality of their contributions and pledged more support for the Interim Government. Many expressed the view that some of the persons incessantly seeking power and the activists supporting them if given an opportunity, would not shy destroying the professional careers of many Ambazonians with the same zeal with which they are attacking the Interim Government; something that French Cameroun has tried over several years and failed.

Cameroon Concord News Group strongly cautions Ambazonians against the intentions of persons or groups that are doing everything to distract their attention from supporting ground zero local government by local government or county by county intensified self-defense operations, the struggle to free the President of the Federal Republic of Ambazonia and all Ambazonians under captivity, the ongoing diplomatic efforts and bringing French Cameroun terrorists to account for their crimes.  The disruptive activities of these individuals and groups if allowed to continue will benefit French Cameroun and its accomplices in Nigeria and other places.