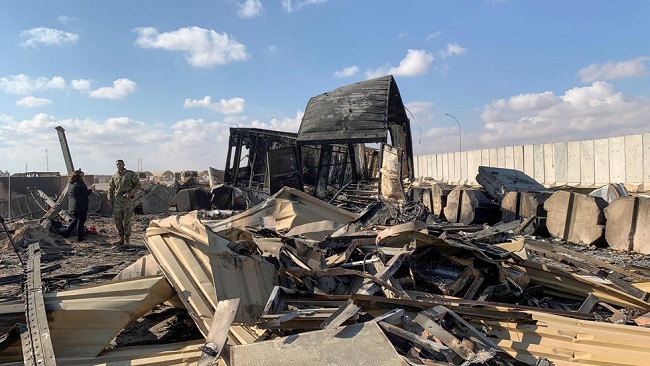 ‘Surviving was a miracle’: Iran’s missile attack on Iraq base 0

Waves of ballistic missiles, soldiers hunkered down in bunkers for hours, intense shock waves — a top US commander said he reacted to Iran’s unprecedented attack against an Iraqi base with “disbelief”.

In an exclusive interview with AFP at the Ain al-Asad airbase in western Iraq, Lt. Colonel Tim Garland said his superiors had given him “a couple hours of advance warning” last Tuesday night that an attack by Iran was coming.

“My first reaction was shock, initial disbelief,” he said, sceptical that Iran would be capable, and willing, to conduct a bold attack on Ain al-Asad.

The airbase was targeted in retaliation for the US killing top Iranian general Qasem Soleimani in a drone strike in Baghdad on January 3.

The base is one of the largest in Iraq, with 1,500 US troops making up the bulk of a coalition presence directly adjacent to thousands of Iraqi forces.

Getting those forces to safety was an act of quick thinking and coordination across the army and air force commanders at Ain al-Asad, Garland said.

By 11:00pm (2000 GMT), US and coalition forces had evacuated from their sleeping quarters and offices, and were hiding out either in fortified bunkers or dispersed across the base.

They waited, tense, for over two hours.

But not even their commander expected the strength of the blasts that came next.

“When the first round came in, it was the loudest, most powerful noise I’ve ever heard,” Garland told AFP.

“There’s something unnatural about the air. The way it moved, the way it heated up; the shock wave that came in and bowed the door in and bowed it back out,” he said.

Starting at 1:35am and for the next three hours, around five volleys of ballistic missiles slammed into the base at varying intervals.

“I have not been that scared for a long time. It’s been a while,” said Garland, who has served multiple tours in Iraq.

“We didn’t know what it was going to look like — if there was going to be a carpet bombing effect,” he added.

When the strikes quietened around 4:00am, commanders and soldiers emerged from their bunkers to fires burning across the base, more than a dozen impact sites but — miraculously — no casualties.

Two soldiers who had been in guard towers were blown out of their positions but only suffered concussion, the commander said.

“How they survived was a miracle of God,” Garland remarked.

He said the volleys that hit the base were timed in such a way as to trick soldiers into thinking the bombing was over.

“It was just enough time to make you feel safe. It was my opinion that it was intended to inflict casualties,” said Garland.

Hossein Salami, commander of Iran’s Revolutionary Guards, said on Sunday the missiles it fired in the early hours of Wednesday were not aimed at killing American personnel.

By Monday, most of the impact sites had been cleared.

A bulldozer was piling up the last of the twisted metal and debris from the last site, located by the base’s airfield.

A soldiers’ living quarters had been totally pulverised and still smelt of charred metal.

Soldiers who lived there told AFP they had lost all their personal belongings — clothes, books, pictures of their families and mementos they had carried through more than a decade in the military.

But given the intensity of the strikes, Garland said, they were lucky.