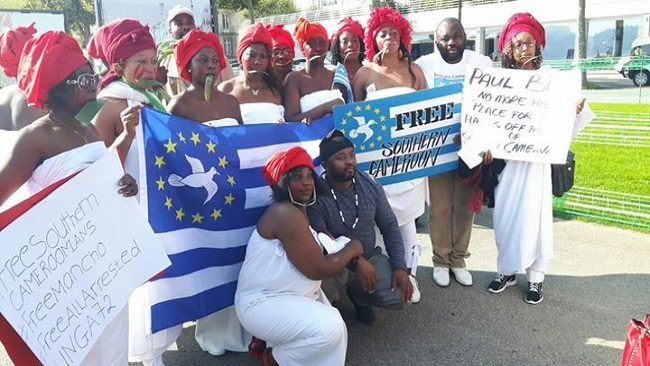 The “Anglophone Crisis” in Cameroun – Genesis, Escalation and Recommendations 0

The Norwegian Refugee Council for two consecutive years (2019 & 2020) has characterized the ongoing Anglophone Crisis in Cameroun as the world’s most neglected conflict. A multi-faceted crisis arising from the inability of the Anglophone and Francophone entities to co-exist as the autonomous federated states originally agreed upon in 1961, when the UN-Trusteeship territory of Southern Cameroons was granted independence by “… either joining the Federal Republic of Nigeria or La Republique du Cameroun”.

Following a plebiscite in 1961 to determine whether to join Nigeria or Cameroun, the people of Southern Cameroons voted to join French Cameroun in a relationship comprising two federated-states.  The English-speaking Southern Cameroons comprises 20% of the total population of the country. A similar arrangement between Senegal and Gambia (The Senegambia Confederation 1981-89) was scrapped based on the fundamentally different institutional traditions of the Gambia (Anglophone) and Senegal (Francophone) even though the two countries with regard to native language, religion & ethnicity, have more in common than Cameroun. Whereas Southern Cameroons entered into “a gentleman’s agreement” with la République du Cameroun, the strong relations that exist between France and its former African colonies hung over the Francophone majority, thus “nipping in the bud” any opportunity for Anglophone autonomy in the originally agreed federation before it even had an opportunity to sprout.

The current multi-faceted crisis has evolved from the initial intention of the 80% Francophone administration of Presidents Amadou Ahidjo and Paul Biya to “assimilate” the 20% Anglophone population over the 60+ years of co-existence. Anglophones, who are exceedingly passionate about their language, anglo-saxon education system, traditions, and institutions, such as the Common Law, have fought to maintain them over the years, to the point of shedding blood. Areas of dispute and deep-seated Anglophone grievances include: Politics (constitutional failure on the form of the state); Administrative Affairs (dominated almost entirely by Francophones); Economy (significant under-investment budgets for Anglophone areas compared to the rest of the country); Culture (imposition of French language on Anglophones including using non-English speaking francophone teachers in English schools); among a litany list of others. In 1972, President Amadou Ahidjo single-handedly changed the constitution, including the name of the country to “United Republic of Cameroon” and created a more strongly centralized government. The people of Southern Cameroons felt marginalized and stripped of all their autonomy.

In 1984, President Paul Biya completed the “assimilation” his predecessor started by reverting to the original name of the 80% Francophone majority country, further revised the constitution to institute a lifetime presidency, and enforced even stronger centralization and greater marginalization of Anglophones. Corruption increased in the country, crippling the economy and any complaints from Anglophones were ruthlessly dealt with. For example, the use of military tribunals and harsh prison sentences was enhanced, especially among the Anglophone minority.

In October 2016 English-speaking lawyers, students and teachers began peaceful demonstrations to protest under-representation, cultural marginalization, and the systematic “assimilation” and erosion of the Common Law and Anglophone educational system by the Francophone-dominated government. When their requests were violently repressed by the security forces, other trade unions and civil society organizations in the Anglophone regions came together and demanded a return to the federal system of Government as ordained by the UN-Trusteeship terms for the Unification of the British Southern Cameroons and the French Cameroun in 1961. Anglophones determined that having patiently watched their autonomy stripped away, they would maintain their Anglo-saxon culture under any means, even death. Like the Senegambia case in the 1980s, they were ready to end the Francophone domination and if possible, have a country of their own.

From October 2016 to October 2017, Biya’s military (the infamous BIR – Battallion d’Intervention Rapide) repeatedly used live ammunition, killing peaceful protesters, something that never happens in Francophone Cameroun. Horrendous photos and videos of the killing spree were widely circulated on social media. The people decided to defend themselves from the brutal army cracked down which occasionally included the deployment of helicopter gunships. Rather than engage the people in a political dialogue on the root causes of the crisis as prescribed by the United Nations, Paul Biya preferred to openly declare war on the Anglophone people on November 30, 2017 at the Yaoundé Nsimalen airport upon his return from the Franco-African summit in Abidjan. The regime was confident that the Anglophone rag-tag self-defense forces would be eliminated in a few weeks, and thus allotted no more than three months to the war effort, with French support. As images of students tortured and raped, villages burned down with old mothers unable to flee, circulated on social media, the regime met the full force of the people’s passion. The government intensified the military response and intermittently shut down the internet in the Anglophone regions for 94 days, to hide its atrocities. Villages emptied out as soldiers looted and burned down homes, raped women and girls, and indiscriminately shot at civilians, especially young men and boys. Significant among several foreign clergymen gunned down by the military is Rev. Charles Wesco, an American citizen.

In January 2018, the political leaders of the Anglophone struggle were abducted from Abuja, Nigeria and extradited to Yaoundé, Cameroun. Their detention in the notorious SED and subsequently in the Kondengui jail, followed by arbitrary trials, life sentences and hefty fines further fueled the struggle. The Anglophone Diaspora mobilized support for the war effort against a regime strongly determined to win militarily. The government initially issued statements that there was no Anglophone crisis but eventually bowed to pressure for mediation by staging a “grand national dialogue” (in Yaoundé from 30 September to 4 October 2019) during which a “special status” was accorded Anglophones, as Biya explained during the November 2019 Mo Ibrahim Peace Forum in Paris, after failing for years to assimilate them into the dominant French culture. Even with such pretentious overtures, the killings and atrocities have intensified and a horrendous humanitarian crisis of this most neglected conflict is now quite evident:

• Over 100,000 Southern Cameroonians have fled to neighboring Nigeria, with numbers rising steadily as more villages are set ablaze.

• Over 1,000,000 internally displaced (IDPs) Southern Cameroonians have sought refuge in bushes and in urban areas within the country.

• Over 4,000 Southern Cameroonians have been arbitrarily arrested and incarcerated, particularly young men.

• Over 20,000 Southern Cameroonian civilians have been killed by the military.

• Over 500 villages in Southern Cameroons have been burned down by the army.

• Schools and universities have been closed for over four years.

• Southern Cameroons has been heavily militarized since the protests began in October 2016 with the underpaid military engaging in criminal activities and terrorizing civilians in towns and villages.

• There are more than 5,000 seriously wounded civilians from the conflict.

• Numerous young girls and mothers have been raped and impregnated by the military.

• Images of summary executions and mass burials are shared daily on social media.

It is difficult to determine the exact figures of the atrocities since the government refuses to give account and denies access to humanitarian and human rights organizations. There is evidence of security forces increasingly perpetrating extrajudicial killings and burning entire villages. On the 14th of February 2020, for example, at least 22 civilians, including 14 children, were massacred by government forces in Ngarbuh in the north-west region. As recently as the 10th of January 2021, 9 other civilians including women and children were massacred in Mautu, Muyuka in the south-west region of Cameroun. The security situation in the Anglophone region has continued to deteriorate while the atrocities increase, notably are the following incidents:

The outbreak of the Coronavirus Pandemic has worsened an already deplorable situation for the affected people. Despite the government’s military aggression towards civilians, Cameroun was elected in October 2018 to the Human Rights Council for the 2019-2021 term. Following a visit to Cameroun on May 6th, 2019 the UN High Commissioner for Human Rights urged the government to hold accountable members of the security forces who commit serious human rights abuses. On May 13th, 2019, the UN Security Council (UNSC) held its first Arria Formula meeting on the humanitarian and human rights situation in Cameroun. On February 17th, 2020, UN Secretary-General António Guterres condemned the killings in Ngarbuh and called upon the government to hold accountable those responsible. The UN’s Special Representatives on Children and Armed Conflict, Sexual Violence in Conflict, and Violence Against Children, as well as the Special Adviser on the Prevention of Genocide, issued a joint statement on February 21st on the deplorable human rights abuses committed against civilians in the Anglophone regions of Cameroun. On June 22nd, five Nobel Peace Prize Laureates, along with two former heads of state, other eminent persons, and the Global Centre for the Responsibility to Protect, visited Cameroun and called upon all parties to the Anglophone crisis to declare a humanitarian ceasefire amid the COVID-19 pandemic. This call has fallen on deaf ears.

The following is recommended:

•Free all Southern Cameroons Political Prisoners being held by the Biya regime.

•Include the ongoing Anglophone crisis on the agenda of the UNSC and propose a Peacekeeping Force for the region to ensure an end to the bloodshed and the atrocities of the BIR on the Anglophone population.

•Identify a Sponsor for the Negotiations between the Government and Southern Cameroonians for a sustainable Peace Agreement.