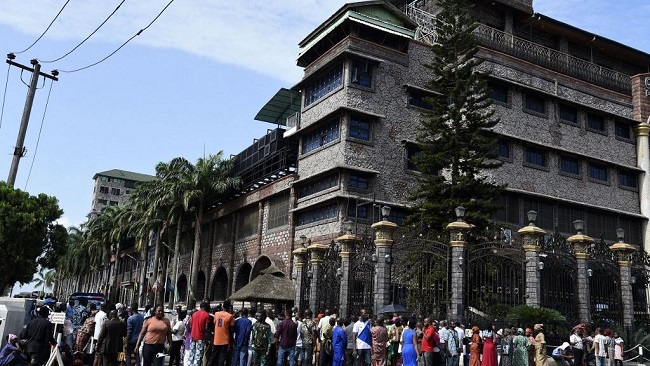 Thousands of Nigerians have been paying their last respects this week to Temitope Balogun Joshua, one of Africa’s most popular televangelists, known as T.B. Joshua.

The controversial Nigerian-born pastor died about a month ago at the age of 57.

A memorial service was held for him Thursday at the auditorium of the Lagos headquarters of the megachurch he founded, Synagogue Church Of All Nations. The ceremony was aired live by his Emmanuel Television Station.

Joshua’s body, dressed in a white suit and in a transparent casket, was displayed as mourners, many weeping, filed past, including people visiting from different parts of the world to pay their respects.

Joshua was noted for making predictions and for his claims to cure various ailments and to make people prosper through miracles. He was, however, controversial, with critics questioning his claims of cures and alleging that he profited from desperate people seeking hope.

More than 15,000 people from Nigeria and abroad attended Joshua’s Sunday services in the stadium-like church, including many African presidents, senior government officials, international soccer players, musicians and other high-profile celebrities. Joshua’s popularity reached across Africa and to South America where he held many religious crusades.

In September 2014, the guest house of the Lagos church collapsed, killing more than 100 people, most of them foreigners who were in Nigeria to attend his services.

While authorities say the building collapsed because of structural defects, T.B. Joshua insisted the building was blown up by a small plane that he claimed flew over it shortly before it tumbled down.

Tributes and services have been held all week. Joshua will be buried Friday. He is survived by his widow and three children.