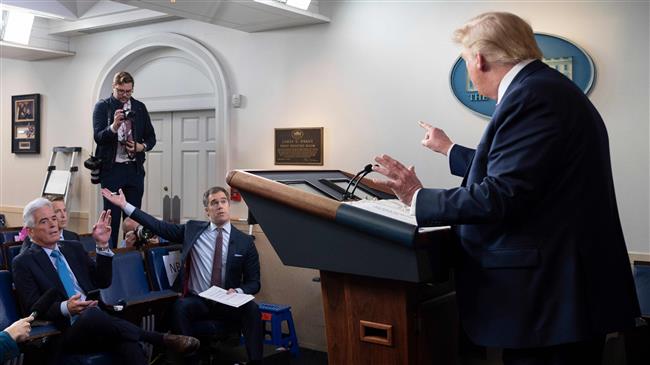 US President Donald Trump viciously attacked an NBC News reporter after he asked Trump what his message was to Americans who were afraid the coronavirus pandemic is spreading across the country.

Trump has repeatedly used the term “fake news” to cast doubt on critical media reports about his administration, often without providing any evidence to support his case.

“What do you say to Americans, who are watching you right now, who are scared?” Alexander asked. The reporter cited the latest pandemic statistics showing thousands of Americans are now infected and millions are scared.

“You’re doing sensationalism,” Trump charged. “And the same with NBC and Comcast. I don’t call it Comcast. I call it ‘Con-Cast.'”

Moments later, Kaitlan Collins, a White House correspondent for CNN, asked Trump if it was appropriate to embark on tirades against members of the news media during a public health crisis.

Trump defended his verbal assault on Alexander, saying he’s “not a good journalist” and launching into another rant against him.

“Coming together is much harder when we have dishonest journalists,” Trump said.

About 60 percent of Americans are now ‘very’ or ‘somewhat worried’ they or a family member will be exposed to the coronavirus, up from 36 percent in February, while confidence in the government’s ability to respond has fallen sharply, a Gallup poll released on Monday showed.

As of Saturday morning, at least 19,624 people across the US have tested positive for the coronavirus, and 241 people have died, according to data from Johns Hopkins University.

Sick people across the US say they are being denied the coronavirus test, as American states scramble to slow the spread of COVID-19 and stop hospitals from being overwhelmed with a surge in critically ill patients.

The former Surgeon General of the United States warned last week that America’s top medical centers are suffering from a severe shortage of coronavirus testing supplies and are being forced to turn away potential patients amid the fast-spreading pandemic.