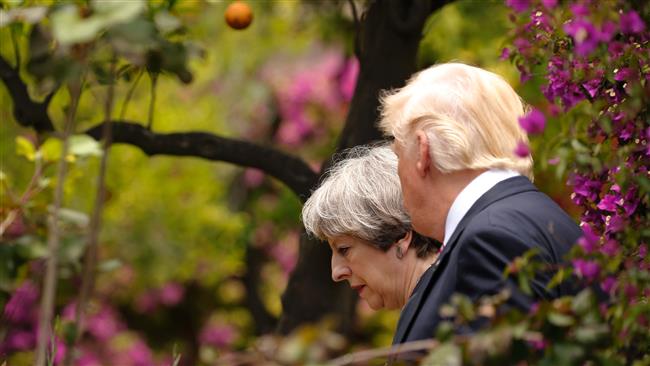 Trump cancels British trip amid fears of being unwelcome 0

US President Donald Trump has canceled plans to visit Britain next month to attend the opening of a new US embassy in London over fears he will not be made welcome and would be greeted with mass protests, reports say.

Sky News and the Daily Mail both reported on Thursday US Secretary of State Rex Tillerson will take Trump’s place at the event scheduled for the end of next month. Trump was expected to make his first trip to the UK since entering the White House and had originally been scheduled for a full State Visit including a Royal banquet at Buckingham Palace but this was later downgraded to a “stripped-down” trip that did not involve getting the full “red-carpet” treatment from the Queen.

One senior source suggested to the Daily Mail that Trump had cancelled the trip because he was unhappy about the arrangements and the scale of the visit.

Trump had previously expressed concern about the likelihood of mass protests in a potential trip. Last year he told British Prime Minster Theresa May that he did not want to go ahead with a visit until the British public supported it.

The intention was to repeat the success of Barack Obama’s visit to Britain in 2011, but critics pointed out the convention was to wait for a President’s second term in office before being granted the honor.

The prospect of mass protests were raised last month after the Labour Party leader Jeremy Corbyn urged his followers to turn out in force if Trump visited the UK to send him a ‘clear message’. More than a million people signed a petition last year calling for the state visit to be cancelled.

Downing Street has declined to comment but reports suggest No 10 was aware the visit has been postponed.