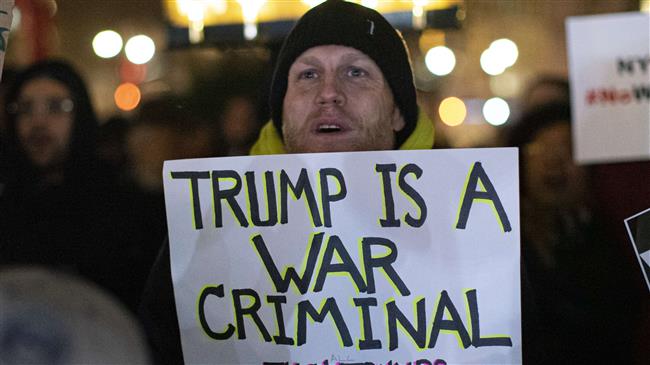 The vast majority of Americans say the US assassination of Iranian Lieutenant General Qassem Soleimani has made America less safe and shows that President Donald Trump’s behavior with Iran is “reckless,” according to a new poll.

The USA Today/Ipsos poll found that Americans, by 55%-24%, said they believe the killing has made the United States less safe, rejecting a fundamental argument the Trump administration has made.

The poll also found that a majority of those surveyed, by 52%-34%,  called Trump’s behavior with Iran “reckless.”

There was overwhelming agreement among those surveyed that Soleimani’s killing made it more likely Iran would attack American interests in the Middle East (69%), that there would be attacks on US soil (63%), and that the United States and Iran would go to war (62%).

By 47%-39%, those surveyed said Trump ordered the killing of Soleimani in an attempt to divert the focus from his impeachment.

US House of Representatives Speaker Nancy Pelosi said Thursday that T she does not believe Trump had made America safer by assassinating Soleimani, calling the US attack “provocative” and “disproportionate.”

“What happened, in the view of many of us, is not promoting peace, but an escalation,” Pelosi, the highest ranking Democrat in Congress, said at her weekly news conference.

The US House of Representatives passed a resolution on Thursday to stop Trump from further military action against Iran, rebuking the president days after he ordered the strike that killed Soleimani and escalated tensions in the region.

The Democratic-controlled House voted 224-194, mostly along party lines, sending the war powers resolution to the Senate. The fate of the resolution is uncertain in the Senate, where Trump’s fellow Republicans hold 53 of the chamber’s 100 seats,

If passed by the House and Senate, the measure does not need Trump’s signature to go into effect.

The partisan vote reflected the deep divide in Congress over Trump’s Iran policy and how much authority lawmakers should have over the use of the military. Democrats accused Trump of acting recklessly and backed the resolution, while Trump’s fellow Republicans, who rarely vote against the president, opposed it.