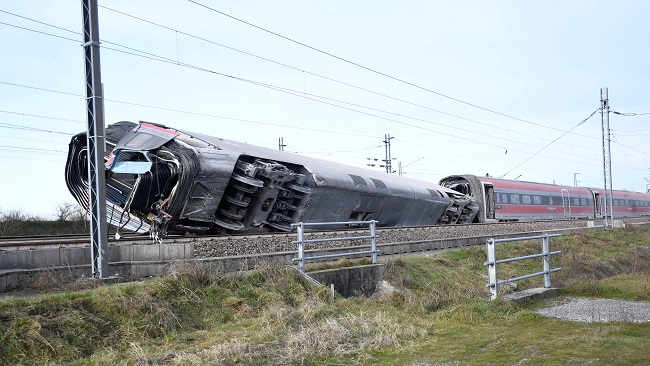 Two rail workers are killed and about 30 people injured on Thursday when a high-speed train derailed before dawn near Milan in northern Italy, authorities say.

“It was a serious accident that had a tragic end with the death of two rail workers” aboard the train, Lodi Prefect Marcello Cardona told reporters, who added that an investigation was underway.

Cardona said none of the injuries suffered were life-threatening and all casualties had been taken to hospital. The Lombardy region’s health department put the number of injured at 31.

“It could have been a lot worse,” Cardona said, adding that there were only 33 people on board the train. Only one person was in the first car and two people in the second when the accident occurred, he said.

“I thought I was dead,” a survivor told local newspaper Liberta from hospital in Piacenza where he was being treated for minor injuries. “I closed my eyes and prayed.”

“The train was going very fast, perhaps 300 kilometers per hour (around 200 miles per hour),” said the unnamed man in his 20s.

“Suddenly, I felt a violent blow. A really loud roar,” said the man who was traveling with a friend in the second carriage.

“We held hands tightly to avoid falling. The wagon overturned and while waiting for help we went out through a hole to save ourselves,” he said, adding that they were stuck on the crashed train for 15 minutes.

The interior minister has been informed and the prosecutor was already at the scene of the accident, the cause of which was unknown, he said.

Two helicopters, hundreds of firemen, police and other authorities descended on the open farmland area outside of Lodi.

“We are greatly saddened by the two deaths, the two rail workers, and we express our solidarity with the families,” said Prime Minister Giuseppe Conte.

“We can’t yet say anything” about the cause of the crash, he told journalists in Rome.

The Milan-Salerno train was en route to Bologna when it came off the tracks before dawn.

Video images showed ripped metal at the front of the first car, where the engine separated from the train. The first car was flipped on its side and appeared to be still attached to the rest of the train.

The engine car could be seen resting on its side on the other side of a nearby railway building several dozen meters away.

According to initial findings reported by the media, the engine went off the rails and struck a freight wagon on a parallel track before hitting the building.

Italian media reported that work had been done on the track on Wednesday night, but Cardona said it was premature to jump to conclusions on a link between that work and the accident.

“Line maintenance is done continually and it’s much too early to associate the accident to maintenance,” he said.

Dozens of high-speed trains on the north-south route were canceled following the derailment, while other trains were rerouted, adding an hour to the journey, operator Trenitalia said.

Italy’s last serious train accident occurred in January 2018, when three women died and about 100 passengers were injured when a packed train derailed near Milan due to poor track maintenance.

Managers and employees of Italy’s state railway, RFI, as well as two former members of the national railway safety agency were charged with negligent homicide and other crimes.