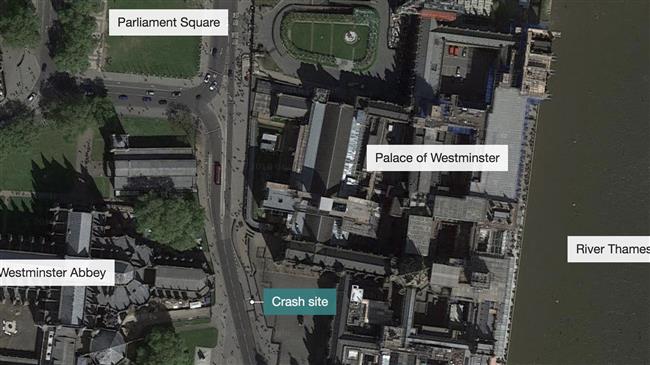 Scotland Yard officers in London have arrested a driver after he crashed a car into the security barriers outside the Houses of Parliament, an act that eyewitnesses said “looked deliberate.”

The incident happened on Tuesday morning, as the unidentified driver ploughed into pedestrians in Westminster before hitting the barriers.

“At 07:37hrs today, a car was in collision with barriers outside the Houses of Parliament,” the Scotland Yard said in a statement.

“The male driver of the car was detained by officers at the scene. A number of pedestrians have been injured. Officers remain at the scene. We will issue further info when we have it,” it added.

Armed police, rescue teams and firefighters are currently at the scene of the crash in central London. Officers were seen surrounding the vehicle before a man who seemed to be the driver was arrested, according to BBC.

British media reported that several cyclists were also hit by the car. Police say none of the injured are believed to be in a life-threatening condition.

Scotland Yard said it cannot rule out terrorism at this stage. A number of eyewitnesses have described the driver’s actions as deliberate.

“While we are keeping an open mind, the Met’s Counter-Terrorism Command is leading the investigation into the Westminster incident,” the Met police said.

“Paramedics are treating a small group of people sitting on the ground outside the Palace of Westminster,” said BBC’s reporter at the scene.

“They are wrapped in silver blankets. One eyewitness, who declined to give his name, said he saw a small hatchback drive into a group of cyclists and then into the barrier outside the Palace of Westminster. The man said that the driver’s action appeared deliberate,” he added.

Police have shut down Westminster tube station as well as the streets around Millbank, Parliament Square and Victoria Tower Gardens.

Police have already put up a Terrorism Act cordon in the area, pushing people back from the site of the incident. Parliament is not currently in session.

The Houses of Parliament are protected with security barriers of steel and concrete. Security measures were bolstered around the parliamentary buildings after the Westminster Bridge attack in March 2017 when an assailant killed four by smashing his car into a group of people.