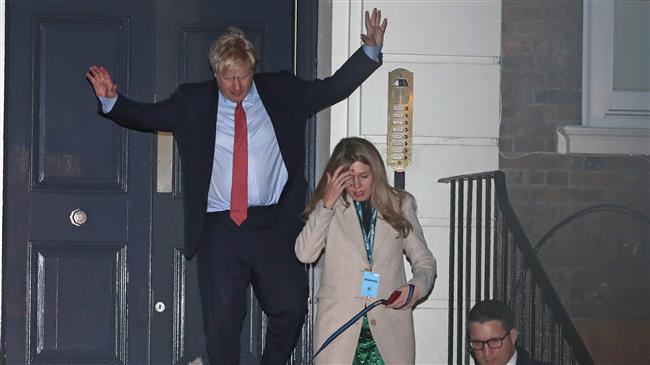 British Prime Minister Boris Johnson says his government has got a “powerful new mandate” to deliver Brexit as his ruling Conservative Party won a huge majority in the parliamentary election, according to exit polls.

An exit poll and early results suggested that Johnson’s party is set to gain 368 seats, 42 above the 326 needed for an absolute majority in the House of Commons.

With 595 of parliament’s 650 seats declared, the Conservatives have won 326, according to a tally of seats won so far by broadcaster ITV.

The prime minister, who will remain in power, arrived at the party headquarters on Friday, saying, “This One Nation Conservative government has been given a powerful new mandate to get Brexit done, unite this country and move it forward.”

“We will get Brexit done on time by the 31st of January, no ifs, no buts, no maybes,” Johnson told cheering supporters later.

Johnson had called for the general election in order to break a deadlock in parliament, which had blocked the country’s withdrawal from the European Union, more than three and a half years after the Brexit referendum in 2016.

The victory, the biggest majority for a Conservative government in more than three decades, will now pave the way for the government to deliver Brexit in January next year.

Corbyn to stand down after ‘disappointing’ loss

That, however, leaves the traditional opposition Labour party with about 190 seats —the worst electoral defeat in 84 years.

The party, which has lost seats in the areas which backed Brexit, is set to win 65 fewer seats than in 2017, according to early results.

Labour party leader, Jeremy Corbyn, who had promised a second Brexit referendum, said he would stand down, though he did not set a date for his departure.

“I will not lead the party in any future general election campaign,” Corbyn said, describing the election results as “very disappointing.”

“I will discuss with our party and ensure there is now a process of reflection on this result and the policies that the party will take going forward,” he added.

Critics blamed Corbyn for the loss, saying many voters had cited their dislike for him on doorsteps across the country.

“Corbyn was a disaster on the doorstep … everyone knew he couldn’t lead the working class out of a paper bag,” said Alan Johnson, a former senior minister.

A party needs to secure more than 320 seats to have a majority in the House of Commons, in order to pass legislation.

The centrist Liberal Democrats were predicted to win 13 seats, the Brexit Party none and the Scottish National Party 55 seats.

The election — the UK’s third general election in less than five years — was dominated by Johnson’s call for getting “Brexit done.”  He is now expected to bring forward his Brexit legislation before Christmas.

Swedish Prime Minister Stefan Lofven said on Friday the results meant Brexit would now materialize and that time was short to seal a new relationship deal between the EU and Britain.

“It is a very clear result – it will not change by tomorrow morning,” Lofven told reporters on leaving an EU summit in Brussels that Johnson skipped.

“(It) means that we will move forward with our separation… we now have 11 months to hash out a deal. It’s a very short time.”

Johnson’s deal for a withdrawal from the European Union has been agreed to in principle by the Parliament but is yet to be fully ratified by lawmakers.

Some in the government say Johnson will use his clear victory to push for a closer economic partnership with the bloc to protect manufacturing jobs.

If the deal fails once again, the plan is to leave the transition stage without a deal, as had been declared in the manifesto before the election.

In a reaction to early results, US President Donald Trump took to Twitter on Thursday, saying, “Looking like a big win for Boris in election”.

Trump had formerly called on Johnson to leave the European Union without a deal if he can’t get better terms from EU leaders.

The European council president, Charles Michel, said earlier that EU leaders would discuss the results of the election on Friday, but that there was “a strong message” coming from Britain.

“We will see if it’s possible for the British parliament to accept the withdrawal agreement to take a decision, and if it is the case, we are ready for the next steps,” he said.