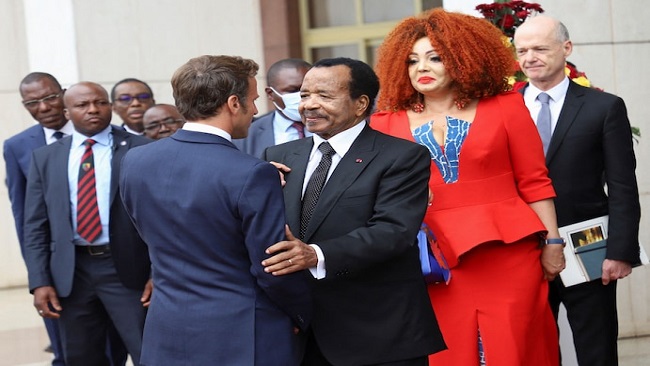 Ukraine War: Africa is being pushed to take sides 0

When French President Emmanuel Macron visited Cameroon this week, he called out an entire continent for “hypocrisy.” Europe had decisively identified Russia’s invasion of Ukraine as a war, he said during a news conference with Cameroonian President Paul Biya on Tuesday, but much of Africa had not.

“I have seen too much hypocrisy, particularly on the African continent,” Macron continued, “and — I’m saying this very calmly — with some not calling it a war when it is one and saying they don’t know who started it because they have diplomatic pressures.”

The French leader’s remarks, which came on the second day of a three-nation tour of Africa, showed a sharp contrast with those from another current visitor to the continent: Russian Foreign Minister Sergey Lavrov. The veteran diplomat began his own four-nation tour of Africa on Saturday, singing praises for Africa and how the continent handled the fallout from the war in Ukraine.

“We appreciate the considered African position as to the situation in and around Ukraine,” Lavrov wrote in a column published in newspapers in Egypt, Congo, Uganda and Ethiopia, the four countries he is in the midst of touring. “Although unprecedented by its scale, the pressure from beyond has not brought our friends to join the anti-Russian sanctions. Such an independent path deserves deep respect.”

These concurrent visits from Western and Russian officials show a difficult reality for African nations. Many had sought to avoid taking a side on the war in Ukraine,, with 25 of Africa’s 54 states abstaining from a vote to condemn Russia’s invasion of its neighbor during the U.N. General Assembly in March.

But whether they like it or not, Africa has been dragged into the conflict. The most glaring issue has been economic, with many countries already shaken by the pandemic now facing a food crisis. African nations once relied heavily on Ukrainian grain — now they are facing soaring prices after Russia blocked ports by the Black Sea fleet. Steep oil prices, meanwhile, have increased economic pressure on many households.

Macron also addressed the issue of food prices during his visit to Cameroon, though he dismissed claims that he was visiting the continent just because of the Ukraine war.

“European economic sanctions on Russia that are now affecting Africa are intended to stop Russia’s attack on Ukraine’s sovereignty and not to punish Africans,” Macron said Wednesday. “France will assist African countries to face the shocks caused by the war by encouraging local investments in agriculture to increase food production.”

U.S. Special Envoy for the Horn of Africa Mike Hammer is also visiting Egypt and Ethiopia this week, where he is due to meet with leaders of the African Union. The State Department has described the main objective of the talks to provide U.S. support for a diplomatic solution over a dam project that has put the two countries at odds over water supplies.

Last week, the United States announced a $1.3 billion “surge” in aid for countries in the Horn of Africa, pointing to the fallout from an enormous drought across Ethiopia, Kenya and Somalia. But there are fears that the current level of aid from Europe is not enough: Devex reported last week that an internal document from the European Union delegation to the African Union saw “the EU losing the battle for hearts and minds in Africa over the conflict.”

African nations have been inundated with counter-information backed by the Kremlin. In the column that presaged the visit, Lavrov said the food crisis hitting Africa was partly due to Western sanctions on Russia, but also amounted to a global economic system that supported the West at the expense of others.

“I would like to emphasize that the speculations of Western and Ukrainian propaganda that Russia allegedly ‘exports hunger’ are completely unfounded. In fact, these are yet another attempt to shift the blame to others,” Lavrov wrote, adding that Russia would live up to obligations in “exports of food, fertilizers, energy and other goods vital for Africa.”

Russia has recently sought to ally itself with Ethiopia — once a steadfast partner of the West. The country now faces strained relations with the United States and Europe due to alleged human rights abuses during the war in Tigray.

Russian officials have used the conspiratorial concept of a “golden billion” elite in the West to seek international support. On Wednesday in Addis Ababa, Lavrov gave a speech to African Union diplomats at the Russian Embassy in the Ethiopian capital where he offered an anti-colonial explanation for Moscow’s decision to invade Ukraine and the subsequent international backlash.

“I am sure the overwhelming majority of world countries do not want to live as if the colonial times (have) come back,” Lavrov said.

While Russia does not have the same colonial legacy in Africa, Moscow has a lengthy relationship with many nations that goes back to Soviet support during the Cold War. Some countries that abstained from the General Assembly votes on Ukraine have allegedly done so based on anti-colonial movements with close links to the Soviet Union, according to one analysis.

Macron’s strongest argument against Russia may be his claim that the country is “one of the last imperial, colonial powers.” Speaking in Benin on Wednesday, the French president said the invasion of Ukraine was “a territorial war, the likes of which we thought had disappeared from European soil. It’s a war from the early 20th, even the 19th century.”

France, however, is in the midst of coming to terms with its presence in West Africa, ending Operation Barkhane — a task force that has tried to combat violent jihadist movements in Mali, Niger and Burkina Faso. Macron said Wednesday that despite this change, France remained “resolutely committed” to security in Africa.

Meanwhile, Russian mercenaries, most notably the Wagner Group, have spread their influence across much of West Africa. The Center for Strategic and International Studies in Washington says 18 countries now have a Russian mercenary footprint, with groups like Wagner supporting the controversial 2020 coup d’etat in Mali which led France to draw back from the country.

Contrary to what Macron claimed in his current visit to the continent, the majority of African nations have condemned Russia’s invasion of Ukraine during the U.N. General Assembly vote in March. The day after the invasion, all three African representatives on the 12-member Security Council voted in favor of a motion to end the war. Russia, a permanent member of the council, vetoed it.

And even before that, Kenyan Ambassador Martin Kimani gave a powerful speech where he likened Russian ambitions to take back Ukrainian land to the colonialism that casts a long shadow over his continent.

“This situation echoes our history,” Kimani said on Feb. 22, echoing Macron’s later comments. “Kenya and almost every African country was birthed by the ending of empire.”