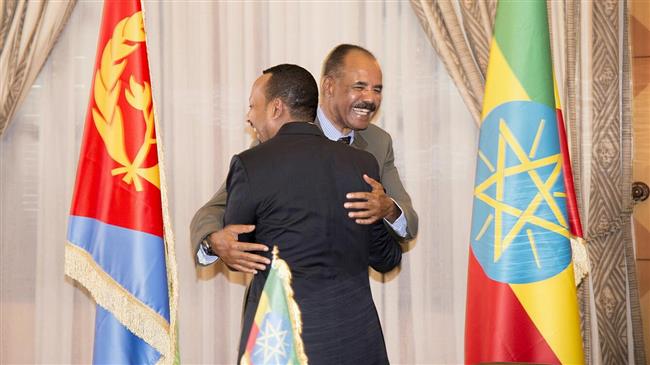 The United Nations Security Council (UNSC) has hailed the rapprochement between ex-foes Eritrea and Ethiopia but has not offered to review the sanctions on the former country after expressions of concern by a number of council members.

A draft UNSC statement, initially prepared by Sweden, on Tuesday “reaffirmed that efforts by the Government of Eritrea to engage with the international community enable a review of measures on Eritrea.”

The US, China, the UK, France, and the Ivory Coast, however, objected to tying the betterment of ties between the two African neighbors to a review of Eritrea sanctions and ultimately dropped that reference from the statement, according to diplomats cited by Reuters.

Ethiopia, which is a current UNSC member, announced its desire on Monday for the UN to lift its own sanctions on Eritrea. Ethiopia and Eritrea had declared an end to their state of war earlier in the day and agreed on resuming diplomatic ties, developing ports, and renewing flights between the two nations after decades of conflict.

Eritrea remains under a UN arms embargo since 2009, after UN experts monitoring sanctions against Somalia accused Eritrea of providing political, financial, and logistical support to armed militants, undermining peace and reconciliation in the largely-lawless and impoverished Somalia. Eritrea, however, has rejected the accusations.

The 15-member UNSC is due to renew its arms embargo and targeted sanctions against Eritrea in November. The body may choose, however, to adopt a resolution before then to remove the sanctions.

A council resolution would need nine votes in favor and no vetoes by permanent members, namely the US, China, Russia, Britain, and France.

The resolution also said that a border dispute between Eritrea and Djibouti would be a factor in any UNSC review of the measures against Eritrea.

Both the US and China maintain military bases in Djibouti.