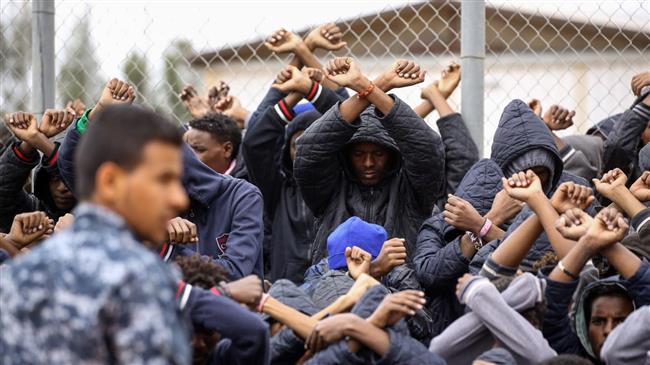 A UN rights report sheds light on the plight of Libyans seven years after a NATO-led military intervention there, saying rival armed groups in the North African state continue to kill and torture civilians with impunity, while Europe-bound refugees are still being bought and sold in “open slave markets.”

In a report to the Human Rights Council on Wednesday, the United Nations human rights office said ordinary Libyans and refugees in the North African state are still being arbitrarily held in appalling conditions with no access to the outside world.

In March 2011, a multi-state NATO-led coalition began a military intervention in Libya a month into an uprising against the country’s then dictator, Muammar Gaddafi.

That mission, which was said to be aimed at paving the way for a ceasefire in Libya and ending attacks against civilians, came to an end in October that year after the fall and death of Gaddafi amid the uprising.

Seven years on, Libya remains a lawless state, with various rival armed factions vying for power. The country is now split between two governments based in the east and the west.

Libya’s coastlines are also largely in the hands of armed groups who smuggle refugees onto boats heading for Italy and Europe.

“Extrajudicial and unlawful killings are rampant,” UN Assistant Secretary-General for Human Rights Andrew Gilmour told the Geneva forum. “In what has become an increasing pattern in and around Benghazi over the last two years, more bodies with signs of torture and hands bound were found in the streets,” he added.

He explained that armed groups are “the main perpetrators of grave human rights violations and act with almost complete impunity.”

According to Gilmour, detention centers run by armed groups, “including those with links to ministries,” have the worst record.

The Libya-Italy route has been one of the major passageways for the asylum seekers attempting to reach wealthier European states.

Amid the mayhem in Libya, a CNN video grabbed news headlines late last year, showing an auction, where refugees captured by traffickers were being sold into slavery.

The report caused international outrage and prompted rights groups to blame Europe for the crisis. They said as long as European countries refuse to create safer and legal means for refugees to reach the continent, people will continue to suffer.

The footage also triggered protest rallies in several European countries, with the participants pointing the finger of blame for the chaotic situation in the state at Europe, which supported the 2011 military intervention.

According to the UN refugee agency, Libya hosts 43,113 refugees seeking to travel to Europe. Up to 90 percent of people taking a perilous sea journey to Europe depart from Libya.

Adel Shaltut, charge d’affaires at Libya’s mission to the U.N. in Geneva, said, “Libya is a victim of illegal migration, it is only a transit country and cannot shoulder all responsibilities. Our coast guards and border guards do not have capacity to face organized crime and terrorism.”

The European Union said it is “deeply also concerned about reports of migrants and refugees allegedly being sold as slaves and call on the Libyan authorities to investigate and hold persons responsible for those acts accountable.”