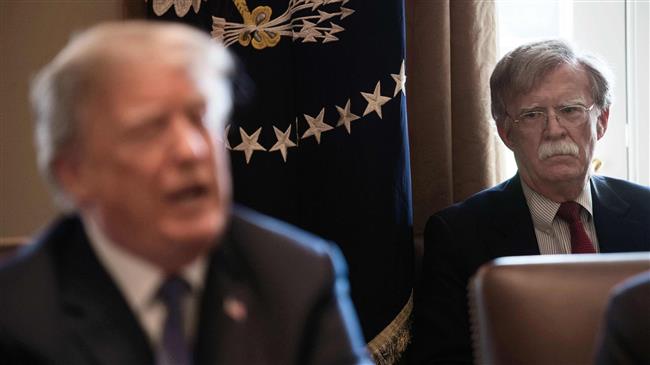 US President Donald Trump has reportedly labeled his former National Security Adviser John Bolton “a traitor,” vowing his book should not be published prior to the country’s presidential election in November.

Trump has directly weighed in on the White House review of Bolton’s forthcoming book – titled ‘The Room Where It Happened’ — telling his staff that he views his former aide as “a traitor” and that everything he told him about national security is classified, noting that he will seek blocking the book’s publication, The Washington Post reported Saturday citing “two people familiar with the conversations.”

The development came after the White House-based National Security Council (NSC) warned Bolton last month that his draft “appears to contain significant amounts of classified information,” some of it top secret. However, it vowed to help him revise the manuscript and “move forward as expeditiously as possible,” according to the report.

“We will do our best to work with you to ensure your client’s ability to tell his story in a manner that protects US national security,” senior director of NSC’s records office, Ellen Knight, stated  in a Jan. 23 letter to Bolton’s attorney.

Trump, however, has insisted to his staff that Bolton’s account of his work in the White House “should not see the light of day before the November election,” the daily reported, citing the two sources who spoke on the condition of anonymity to discuss internal White House discussions.

They further underlined that Trump repeatedly brought up the book with his legal team, asking whether Bolton is going to be able to publish it and telling his lawyers that Bolton should not be allowed to publish any of his interactions with him about national security because they are privileged and classified.

Bolton’s book has vowed to reveal key first-person moments between the former top aide and Trump that were central to the US president’s handling of Ukraine, an account that led to his impeachment last December by the House.

Trump also told national television anchors on February 4 during an off-the-record lunch that contents of the book were “highly classified,” according to the daily, citing notes from one participant in the luncheon.

“We’re going to try and block the publication of the book,” Trump said, according to the notes. “After I leave office, he can do this. But not in the White House.”

As the Republican-controlled US Senate launched a trial in late January on the House’s impeachment charges that Trump had abused the power of his office and obstructed Congress, the New York Times daily reported it had learned a key detail alleged by Bolton in his manuscript: that Trump told him he was conditioning the release of military aid to Ukraine on whether its government would help investigate former vice president Joe Biden and his son.

Trump’s response to the report came in a Twitter post on January 27, claiming he “NEVER told John Bolton that aid to Ukraine was tied to investigations into the Bidens or Democrats.”

While Democratic lawmakers demanded that Bolton be summoned to testify in the Senate trial, the majority Republican senators rejected those calls in their save Trump from potential impeachment.

Meanwhile, the daily further cites a person close to Bolton as saying that the hawkish former adviser has become increasingly concerned in recent weeks that the White House has appeared to claim that broad categories of topics are classified, without clearly identifying or articulating the reasons for that level of protection.

It also cited a separate person close to Bolton as adding that his legal team anticipates the possibility of a long legal battle over the issue.