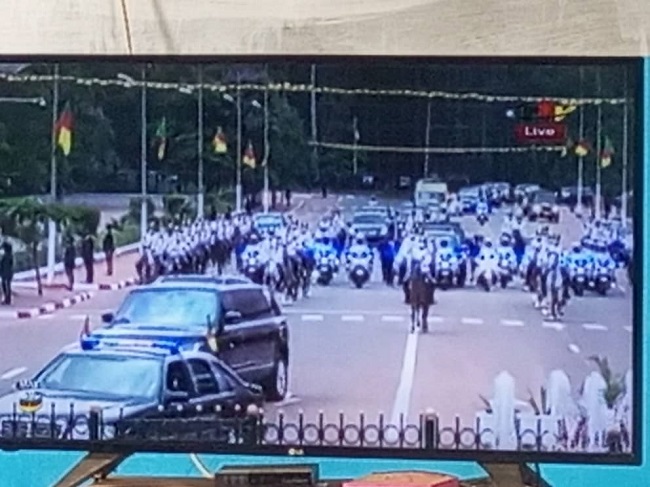 Cameron’s National Day on May 20 has been marked by running battles between government troops and separatists who imposed a lockdown, crippling business in English-speaking western regions. The military says at least 28 separatists who vowed to disrupt celebrations in English-speaking regions of the majority francophone nation were killed in violent battles. President Paul Biya is attending commemorations.

Cameroon’s military sings at a ceremony to commemorate May 20 in the capital, Yaounde, pledging loyalty to state institutions and expressing the readiness of troops to defend the country’s territorial integrity.

The government said the parade marking Cameroon’s 50th National Day was attended by at least 30,000 civilians, led by President Paul Biya. The government said it reduced the time for the military parade to 45 minutes for strategic reasons.

However, opposition political parties, including the Social Democratic Front, said the ailing 89-year-old Biya could not stand up for two hours to honor the military during its parade, as has been the tradition in Cameroon.

The government has denied its troops were transporting French speakers to English-speaking regions. The military says it lost six troops in battles within the past week and that 28 separatists who tried to disrupt May 20 activities were killed in several northwestern towns, including Oku, Kumbo, Bamenda and Nkambe.

Colonel Samuel Tabot Orock is a commander of government troops fighting separatists in Bamenda, the capital of Cameroon’s English speaking North-West region. Orock says the military made sure everyone who came out for celebrations was protected.

“Let the world, and Cameroon in particular, understand that the military in Bamenda know that the secessionist fighters will be doing everything in their powers to disrupt a successful 20th May celebration, that is why we are taking every single measure as far as security is concerned to make sure there is a hitch-free 20th May celebration in Bamenda,” Orock said.

The government said prior to the day at least 35 people separatists suspected of preparing to commemorate the day were abducted by separatists in several towns of the South-West region including Mutengene and Tiko.

Bernard Okalia Bilai, the governor of the South-West region, spoke by telephone from Buea, capital of the region.

Bilai says local administrative authorities and civilians report separatists who abduct and threaten to kill people accused of disrespecting lockdown calls to the military. He says civilians have understood that separatist claims that fighters can create an independent English-speaking state in Cameroon are unfounded.

On May 20, 1972, Cameroon organized what it called a constitutional referendum, during which a majority of its citizens voted to abolish the federal system of government that had existed since 1961 in favor of a unitary state. Separatists say there has been an overbearing influence of French in English-speaking western regions since the 1972 referendum.