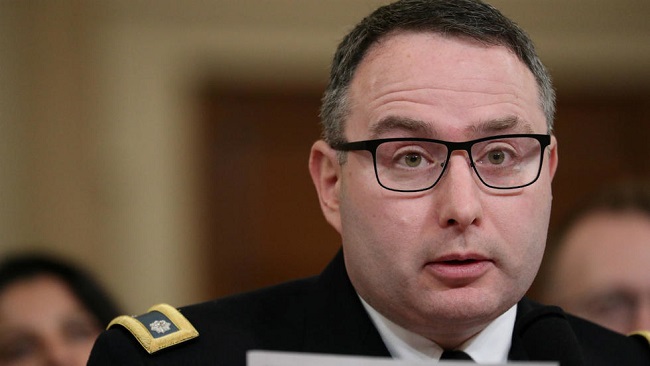 But outside the ornate chamber in the House of Representatives, it was a different story, with the White House and its backers unleashing on social media a full-throated attack on the uniformed officer’s credibility and loyalty.

His family left the Soviet Union for the United States when he was three years old. Vindman testified that Trump’s request that Ukraine investigate a domestic political rival was an improper demand.

While factually correct, Vindman told the lawmakers that as a loyal American, he would not consider such an offer. He called it “comical.”

Trump himself was dismissive when asked about Vindman on Tuesday. “I never saw the man, I understand now he wears his uniform when he goes in,” Trump said.

Vindman usually wears a suit, not his uniform, while working at the White House, one Republican lawmaker, Representative Chris Stewart, observed. It is standard practice for military officers to wear their uniforms when testifying on Capitol Hill.

Republican lawmakers at the televised hearing appeared keen not to cross a line that would upset constituents with a background in military service.

“Lieutenant Colonel Vindman, I think all of us would agree that your father made the right move to come here, and we’re glad that he did,” Representative Will Hurd told Vindman in one of the warmer accolades from Intelligence Committee Republicans.

Stewart asked: “Do you always insist on civilians calling you by your rank?”

“I just thought it was appropriate,” Vindman replied.

Representative Mark Meadows, a Republican ally of Trump’s, said critics can question Vindman’s judgment, but should respect his service to the country.

“Every person who serves needs to be applauded for their service. But it doesn’t mean their judgment is 100% above reproach,” Meadows said outside the hearing.

Others saw the attacks on Vindman differently.

“We have never questioned the patriotism of Republicans, but today’s vile attacks on Lt. Col. Vindman, for simply doing his duty as he saw fit, leaves us truly shaken,” Will Goodwin, the director of government relations for VoteVets.org, wrote on Twitter.