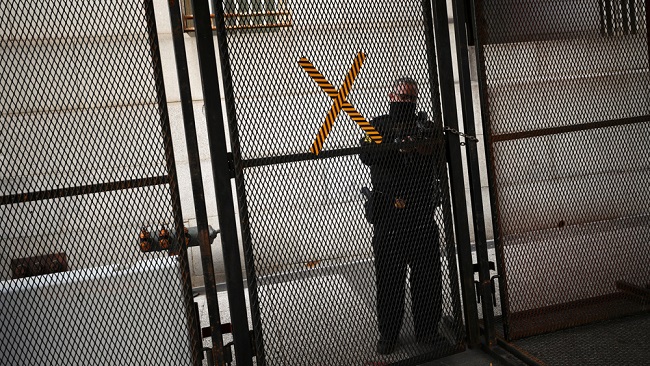 A temporary wall has been erected around the White House perimeter as law enforcement agencies prepare in advance for potential unrest and violence on Election Day.

Media reported a non-scalable “anti-climb” fence, made from a welded wire mesh that is  impossible to climb and very difficult to cut, installed around the White House on Monday.

Additional fencing already had been erected around Lafayette Square, across Pennsylvania Avenue from the White House, the location of protests over racial equality in June following the police-killing of George Floyd, a 46-year-old black man who died on May 25 when a Minneapolis police officer knelt on the neck of the handcuffed former bouncer for nearly nine minutes during an arrest.

The new fencing was among other measures being taken in Washington, DC, and other cities ahead of expected protests.

Meanwhile, fears of possible unrest on Election Night and beyond prompted many businesses and shops to board up doors and windows.

In anticipation of violence, in New York City, the Empire State Building, the Macy’s department store, and the skyscraper that houses the Trump-favored Fox News channel were all boarded up.

On Rodeo Drive, one of the most expensive shopping streets in California’s Beverley Hills, staff stripped the display windows at Tiffany & Co. and Van Cleef & Arpels of their jewels.

“Hopefully this is all for nothing,” Kathy Gohari, vice president of the Rodeo Drive Committee, the merchants association, said on Monday as she watched workers nail plywood over luxury storefronts.

However, in New York City’s Times Square in recent days ardent Republican Trump supporters and Democrats, as well as adherents of the anti-fascism movement known as ANTIFA, have been clashing with one another.

US President Donald Trump has warned that he expected an unprecedented level of cheating and violence in the course of the 2020 presidential election.

“[C]heating can happen like you have never seen,” Trump told a rally in Scranton, Pennsylvania on Monday. US Supreme Court ruling will ‘induce violence,’ Trump warns ahead of Election Day

In a Monday night tweet, Trump criticized the US Supreme Court’s decision to allow officials in Pennsylvania and North Carolina to continue accepting and counting mail-in ballots for a few days after Election Day, saying the court ruling will “induce violence in the streets.”

Trump’s prediction or threat of violence has increased anxieties about the potential for violence in a polarized nation engaged in a bitter and divisive race to send their favored presidential candidate to the White House.

Trump reportedly plans to declare a premature victory if he is “ahead” on Tuesday night, despite uncounted ballots.

The incumbent has highlighted massive voter fraud in this year’s election, downplaying the chances of a peaceful transition to his probable successor.

Thousands of US troops have been put on stand-by for rapid deployment in case of violence.