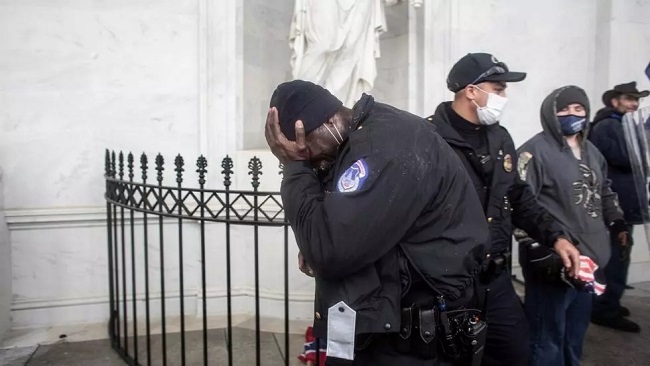 Images of a mob of Donald Trump supporters surging past overwhelmed police to storm the US Capitol have shocked the world. Many have also asked why they bare such a stark contrast to the heavy police presence and violent tactics deployed when Black Lives Matter protesters took to the streets of Washington DC last year.

“This is a complete disgrace. Over the summer we saw federal law enforcement use tear gas, flash bangs, and rubber bullets on Black Lives Matter protesters without provocation. Where are the riot squads now? Are they standing down as white supremacists attempt a coup?” asked DC Council member Janeese Lewis George on Twitter.

In June last year, peaceful demonstrators protesting after the death of George Floyd were removed with teargas and rubber bullets so that Donald Trump could pose for a photo op in front of a church, while the National Guard was called in to protect the capital’s monuments.

On Wednesday, guarding the US Capitol was left to the Capitol Police, who number around 2,000.

It took around two hours for reinforcement to arrive and restore order and just 52 of the rioters have been arrested so far, while one person was shot dead by police.

The Black Lives Matter Global Network labelled the police response on Wednesday a case of “hypocrisy”.

“When Black people protest for our lives, we are all too often met by National Guard troops or police equipped with assault rifles, shields, tear gas and battle helmets. Make no mistake, if the protesters were Black, we would have been tear gassed, battered, and perhaps shot.”